Tennessee quarterback commit Nico Iamaleava has officially earned an invitation to the Elite 11 Quarterback Competition finals. However, according to On3 Sports, Iamaleava will not be participating in the event.

Iamaleava has been showcasing his talents at multiple 7-on-7 tournaments this spring.

After committing to Tennessee on Mar. 21, Iamaleava led his team (Team TOA) to the championship title in the Pylon 7-on-7 tournament held at Farragut High School in Knoxville in April. Then, earlier in June, Iamaleava dazzled at the Overtime 7-on-7 tournament held in Las Vegas. The Overtime tournament boasted some of the top talents around the country, which makes it even more impressive that On3 named Iamlaeava the MVP of the tournament. In addition, the California native and future Volunteer was also named to the tournament’s “Dream Team” by 247 Sports. 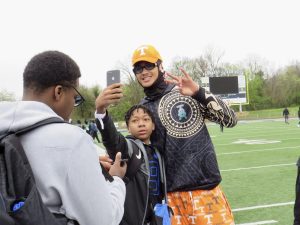 Alongside the spring tournament schedule, Iamaleava also took out a weekend to return to the Volunteer State for an Elite 11 camp that was held in Nashville in mid-May.

There has been no shortage of events for Nico Iamaleava this spring. After committing in late March, Iamaleava found himself in Knoxville in early April for the Pylon tournament and an unofficial visit to see the Tennessee program. That weekend was also Tennessee’s final weekend of spring camp, meaning Iamaleava was present for Tennessee’s alternate-Orange & White spring game. Iamaleava returned to the mid-state in May for the Elite 11 camp, where he was praised by former Super Bowl-winning quarterback Trent Dilfer. And lastly, in June, aside from receiving an invitation to the Elite 11 Finals, Iamaleava took part in the Las Vegas Overtime 7-on-7 tournament and then was back in Knoxville this last weekend for his official visit on Rocky Top.

There’s no doubt that the Elite 11 competition is a valuable tool for rising prospects. The national recognition, the high-level training, so on and so forth. However, Iamaleava has already been competing, training, and getting work in on the national level for the last few months. Since his commitment to Tennessee, whether it be for NIL or for his play on the field, Iamaleava has dominated a fair amount of the college football recruiting headlines. With or without the Elite 11 Finals, Nico Iamaleava is having quite the productive spring and summer leading into his senior season.

The 2022 Elite 11 Finals competition will take place from June 28-30 in Los Angeles, California.