The 2022 Tennessee Volunteers baseball team finished the season with a total record of 57-9. Despite failing to reach the College World Series, Tennessee showed its dominance as the team won the SEC and the SEC Tournament leading into the postseason.

Tennessee holds the same spot in all of the final season rankings except for one. In most cases, with Tennessee being the best team that did not reach the College World Series, the Vols were then placed as the first team outside of the final eight teams. That leaves Tennessee with the No. 9 slot in the final college baseball rankings.

The Vols do crack the top eight in Baseball America’s poll with Tennessee leaping over Texas after the Longhorns went 0-2 in the College World Series. 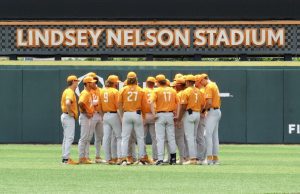 Tennessee finishes behind Ole Miss (National Champion), Texas A&M, Arkansas, and Auburn in all rankings. For reference, the NCAA’s Top 10 is as follows: