The four women’s teams representing the University of Tennessee Athletics Department will be receiving new alternate uniforms for this upcoming season. According to a press release on Thursday, the Lady Vols are set to debut new “Summit Blue” jerseys.

“Four teams will debut the Summitt Blue uniforms during the upcoming 2022-23 academic year – a collection dubbed the ‘Summitt Legacy’ series,” Tennessee stated in the press release. “This fall, the Tennessee soccer and volleyball teams will be the first to compete in the new Summitt Blue jerseys. The Lady Vols basketball team will follow with a full Summitt Blue uniform this winter, and the softball squad’s jersey rotation also will feature a Summitt Blue option this spring.”

Throughout the whole process, the Tennessee brand is officially re-establishing the Lady Vols’ blue as “Summit Blue”, which will be attributed with Pantone 2171 C.

A new kit to honor a legacy 🔵 pic.twitter.com/NMoikc8oqu

“Tennessee’s history as a worldwide leader in women’s athletics, along with the Lady Vols’ unique legacy of excellence are traditions we are proud to celebrate,” Tennessee Vice Chancellor/Director of Athletics Danny White said via the press release on Thursday. “As some of our teams recently saw their new Summitt Blue uniforms for the first time, they reacted with a joy and enthusiasm that I hope will extend to our fans and proud alumni.” 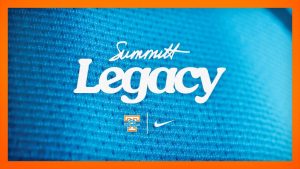 “At the time, no company offered an orange uniform,” Tennessee stated. “So Cronan opted for Columbia blue uniforms with orange lettering when the Lady Vols played at home.”