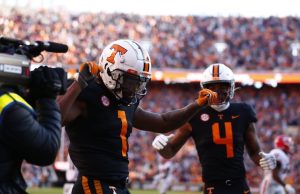 Velus Jones Jr, in his first preseason game with the Chicago Bears on Thursday night, made the most of his game by correcting a mistake in the first quarter.

The Bears’ rookie wide receiver and former SEC Co-Special Teams Player of the Year in 2021 took back the game’s opening kickoff for 28 yards. However, as the Seattle Seahawks defenders were taking him to the ground, Jones lost control of the football for a fumble in his first NFL play. The Bears would go on to recover the ball.

Despite the mistake, Jones didn’t let that initial blunder affect his game. Later in the first quarter, Jones set up deep once again, this time for a punt return.

Jones fielded the punt with his weight shifted backward at his own 20-yard line. After collecting himself and scanning the field, Jones made a break for the left sideline and started flying past guys on his way down the field. Jones Jr took the punt all the way down to the 30-yard line in Seattle territory.

“He’s fast, for sure,” said head coach Matt Eberflus about the Tennessee rookie via the Bears. “He’s explosive. It’s a challenge for him because he’s a rookie and he’s going to have to come in there and show guys what he can do. I think he’s up for the challenge.”

.@VelusJr turned on the burners 💨

“It’s a big confidence boost,” Jones said after the game via the Bears. “All day in the hotel I was just thinking about the plays I was going to make, just trying to visualize everything, so it was a good feeling overall.”

After not playing in the Bears’ first preseason game against Trey Smith and the Kansas City Chiefs, Jones Jr made his NFL debut on Thursday night against the Seahawks.

It couldn’t have been easy to suffer the mistake that Jones Jr did in his first NFL touch with the kick return fumble. However, that’s also the point where other rookies may have given up or sunk their heads low. Velus Jones Jr has been through his fair share of challenging moments filled with adversity, though, and this one wasn’t any different. Jones Jr came back on the field after the fumble and ended up showing the Bears exactly what he can bring to the table from a special teams perspective.

“He can handle this league, you can see that already,” said Luke Getsy, Chicago’s offensive coordinator, via NBC Sports. “Then, the speed just jumped at you on the tape. When that guy gets the ball in his hands, he looks like 4.3 on the field. Not many guys can do that, and I think that is what stood out about this guy. He has a chance to score every time he touches the ball.”

Velus Jones Jr and the Chicago Bears handily defeated the Seattle Seahawks in an NFL preseason game on Thursday by a score of 27-11.