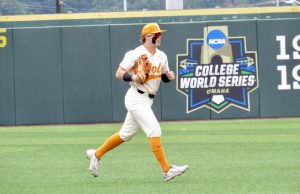 The former Tennessee fan-favorite suffered a dislocated right elbow injury on Aug. 13 after colliding into the outfield wall while trying to chase down a fly ball. According to MLB.com, Gilbert’s right (non-throwing) elbow “spontaneously went back into place before he was examined.”

However, after further tests, the conclusion was that Gilbert was to be sidelined for the remainder of his rookie year in the minor leagues.

“The 21-year-old’s injury will force him to miss the remainder of the season while undergoing rehab on his elbow,” Edwin Perez stated for MLB.com. “Gilbert is expected to be fully recovered prior to the start of spring training.”

Gilbert was drafted with the No. 28 pick by the Houston Astros in the 2022 MLB Draft in July. The former Vol would go on to make his debut for FCL Astros Orange on Aug. 4 before being called up to Single-A ball with the Fayetteville Woodpeckers just four days later. After six games with the Woodpeckers, though, Gilbert would receive his season-ending injury.

In his four games with FCL Astros Orange, Drew Gilbert went 5-for-11 with a double, a home run, four RBIs, and three walks. In his six games with the Fayetteville Woodpeckers, Gilbert cooled down every so slightly to the tune of 5-for-21 with one home run, two RBIs, and one walk.