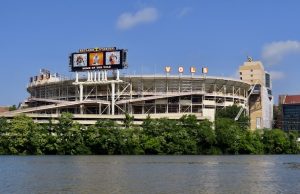 Tennessee’s hit show “Vol Calls” will be making its 2022 season premiere this week in Knoxville, Tennessee.

Vol Calls will return to Calhoun’s on the River in downtown Knoxville this Wednesday evening. The one-hour show will be back in its familiar time slot starting at 8:00 p.m. ET.

Tennessee is also teasing a mystery guest for the show’s season debut this Wednesday.

According to Tennessee, “Vice Chancellor/Director of Athletics Danny White and another special guest are scheduled to appear on Wednesday’s season debut, which will also include a special recorded interview with head football coach Josh Heupel.”

Last season, to kick off the first year of the Heupel era, White brought on Tennessee baseball coach Tony Vitello in that slot.

Heupel will make his first in-person appearance on the show during the second week of Vol Calls, which will be a special Monday show due to gameday being on Thursday to start the season. That show, prior to Ball State on Sept. 1, will take place on Monday, Aug. 29.

Tennessee director of broadcasting and Voice of the Vols, Bob Kesling, will be back along with the Vol Network’s Brent Hubbs to steer the ship during the one-hour show for fans. Kesling and Hubbs will be navigating questions from the fans and discussing current storylines around the team with the season-opener knocking on the door.

Calhoun’s on the River, which will be hosting Vol Calls for an 11th consecutive year, will be giving away exclusive prizes each week on the Instagram (@CalhounsTN) account, according to Tennessee Athletics.

Vol Calls’ season debut will be this Wednesday evening at 8:00 p.m. ET from Calhoun’s on the River. The 2022 Tennessee football team will open their season against Ball State from Neyland Stadium on Thursday, Sept. 1.

Vol Calls will be streamed online at UTSports.com or can be heard using the UT Athletics smartphone app.