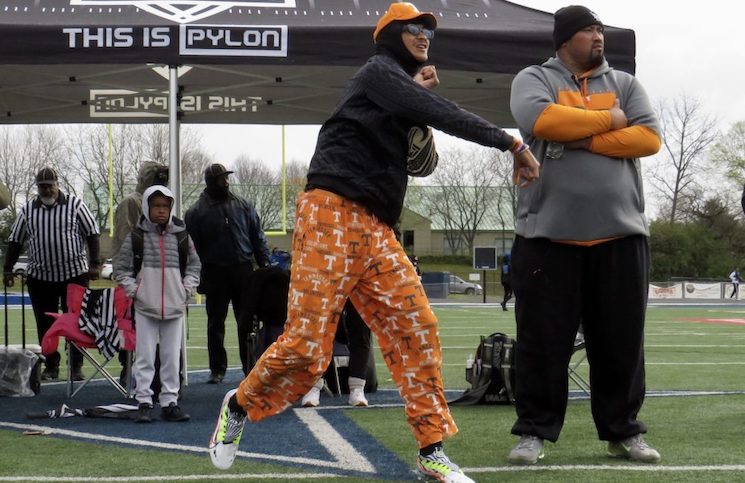 Playing just one half, Iamaleava showed why he is one of the top quarterback recruits in the entire country.

This week, On3 released their player comparisons for the nation’s five-star recruits. The site compared Iamaleava to one of the top young quarterbacks in the NFL— Justin Herbert.

“Like Justin Herbert, Nico Iamaleava is a taller, big-armed quarterback with some of the better natural physical tools we’ve seen from a quarterback in the last few recruiting cycles,” On3 wrote. “Both check in at over 6-foot-5 and have big arms with the ability to drive the football to all levels of the field. They’re also gifted athletically, with the reactive quickness to make plays with their mobility.”

More From RTI: Is Tennessee Back In Carnell Tate’s Recruitment?

The comparisons between the tall, athletic, west coast quarterbacks are obvious, but Iamaleava is more polished at this stage in his career than Herbert was when he was in his shoes.

Herbert was a low three-star recruit when he signed with Oregon out of Eugene’s Sheldon High School. Despite the low recruiting ranking, Herbert was ready to play as a freshman. The now Chargers star, played in eight games as a freshman and sophomore while throwing for over 10,000 yards in his four-year college career.

The 6-foot-6 Herbert saved his best college season for last, completing 66% of his passes for 3,471 yards, 32 touchdowns and six interceptions.

Los Angeles selected Herbert with the sixth pick in the 2020 NFL Draft and the Oregon standout’s exceeded expectations. Herbert threw for 5,014 yards, 38 touchdowns and 15 interceptions in his second NFL season, earning a Pro Bowl invite in the process.

Iamaleava committed to Tennessee in the spring and is looking to push the Vols to top 10 ranked 2023 recruiting class and bountiful success on the field.

The Long Beach, California native ranks as the No. 7 player and No. 4 quarterback in the country according to the On3 consensus rankings.