Tennessee is set to show off more “experience enhancements” to Neyland Stadium this football season.

Last year, entering the 2021 season, the Vols debuted a brand new light show among many other smaller additions. Entering the 2022 season, though, Tennessee will be debuting several new additions both inside and outside of the stadium.

When driving to Neyland Stadium, the new addition that many will notice first are the sets of V-O-L-S letters on the southeast and southwest sides of the stadium. The Vols didn’t just bring back an iconic look from the past but doubled the output by putting one on each side of the jumbotron. 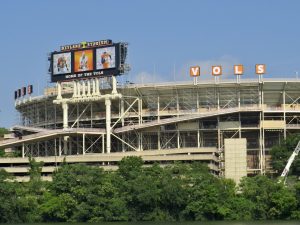 Tennessee debuted a brand new LED light show last season, which is set to make an even bigger return for the 2022 season. Tennessee is also planning on having halftime LED light shows for the season opener against Ball State and the Vols’ week three game against Akron.

In addition to the LED light show, Tennessee’s pre-game and post-touchdown fireworks show will also be making a return for the 2022 season.

For the first time in the history of Neyland Stadium, fans will be able to look north this season and see a jumbotron. Tennessee has installed a brand new jumbotron in the upper deck section of the north side of the stadium, directly opposite the traditional southern stadium jumbotron. A brand-new “North End Zone Social Deck” has also been installed, allowing specific attendees a unique sports bar-type view of the game.

Neyland Stadium: An Update on Tennessee Athletics Tickets in 2022

In terms of outside the stadium, Tennessee will have two unique tailgating spots: The Toyota Volunteer Village and the Truly’s Tailgate.

The Toyota Volunteer Village will highlight new and local bands and musical artists during home games this season and is located across from Circle Park. Meanwhile, the Truly’s Tailgate will be located outside of Gate 9 and will offer a variety of food choices including Texas Roadhouse and drinks for purchase.

Check out Tennessee’s press release on Thursday for more information on the enhancements to Neyland Stadium for the 2022 season.