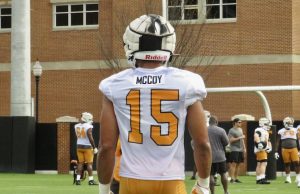 McCoy transferred out of USC in January and wound up committing to Tennessee in May and has been with the team throughout the summer and fall training camp. Despite the process taking longer than expected to get him eligible, McCoy finally received that approval last week and is now able to move forward with week one as normal.

“Certainly a small sense of relief,” Heupel said about his reaction to McCoy’s eligibility at the end of last week. “More than anything just excitement. When I got the news, man, it sent chills down my spine.”

McCoy has been on the Tennessee field since day one of training camp. While some of those days have been limited due to injury, Vols receiver coach Kelsey Pope said this month that McCoy is very effective with his mental reps and has soaked in a significant amount of knowledge just by watching the other receivers go through the scheme.

When he’s on the field, though, McCoy has been locked in. While the former USC player has not played in a year, and really only has one COVID-shortened season of collegiate experience under his belt, McCoy has still been fitting in nicely with the Tennessee receivers.

“So excited for him,” Heupel said about McCoy on Monday. “A young man that’s done it the right way since he’s been here. Has gone through a long, windy journey to get to this point and now he has an opportunity to move forward with his future and go compete with his teammates, his brothers.”

“The beginning portion of practice we were kind of methodical in ramping him up as he came off of not being quite 100 percent at the beginning of summer,” Heupel said about McCoy. “So, we have built him up. He has got a good understanding of what we’re doing. He’s operated fairly efficiently in what we are doing offensively. For all of our guys that are out there playing on the offensive side of the ball with our tempo the first time – you think back to a year ago, it’ll be their first time experiencing it – so, there will be some things that we are going to have to grow through and clean up. He has got a really good understanding of what we’re doing. He has continued to get stronger physically, been more fundamentally and technically sound in what we’re asking him to do. There’s a lot of positive things as we have gone through this training camp with him.”

Bru McCoy is well incorporated into the Tennessee wide receiver room by this point and has especially found a friend in Vols wideout Cedric Tillman. The returning Tennessee receiver says that despite McCoy only being around for a few months, the former USC transfer is already one of his closest friends on the team.

“I love Bru’s physicality,” Tillman said on Monday. “He’s a big receiver like me. Not afraid to lower his shoulder. Very aggressive high-pointing the ball. I can brag about Bru all day, and other receivers. But, you know, Bru’s obviously one of my closer friends on the team now. I know he just got here a couple of months ago but we’re really connected.”

With both Tillman and McCoy listed at 6-foot-3, Tennessee could be dealing with two dangerous and well-sized receivers on the outside this year – especially considering McCoy is possibly going to be a starter on Thursday.

Tennessee released its week one depth chart on Monday afternoon following the press conferences on campus. Jalin Hyatt and Cedric Tillman are listed as two definitive starting wide receivers, with the last spot still undetermined. Currently, Tennessee has listed either Bru McCoy or Walker Merrill to be the third starting receiver on Thursday night in Knoxville.

With the news regarding McCoy’s eligibility coming down last week, Tennessee is now moving forward with McCoy slated to be a participant in this Thursday’s week one game.

“Having the chance to tell [McCoy] and then hear him tell his dad was one of the great moments in my career,” Heupel said on Monday. “You can just tell the sense of excitement and some relief from them that they’re able to just move on and go compete. So really special for him.”

Tennessee and Bru McCoy will kick off the season this Thursday at 7:00 p.m. ET against Ball State in Neyland Stadium.

“Having the chance to tell him and then hear him tell his dad was one of the great moments in my career.”

Josh Heupel talks about his reaction to getting the news that Tennessee WR Bru McCoy would be immediately eligible for the season. pic.twitter.com/8ygwCPvT3F