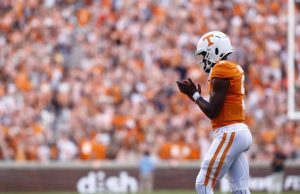 The Tennessee Volunteers are flying well under the radar heading into their week two matchup with Pittsburgh – and it’s not even because of something they did or didn’t do. It’s really just because of the headlines that are being grabbed by teams like Florida, Georgia, and Texas coming out of week one.

Let’s backtrack. Tennessee handily defeated Ball State by a score of 59-10 on Thursday night before the majority of the college football world opened over the weekend. Tennessee handled business against a team they should have and found ways to rotate in a considerable amount of players before an important week two matchup with Pittsburgh. The Vols wrapped up classes on Friday and were back in the film room for a team review on Saturday.

We know that Tennessee head coach Josh Heupel isn’t one for dramatic week-to-week storylines. We also know that Heupel operates well when flying under the radar. And with the way that Florida and Georgia won over the weekend? That’s exactly what is happening heading into week two.

Then, in one of the prime-time games on Saturday night, debuting head coach Billy Napier and the Florida Gators defeated No. 7 Utah in dramatic fashion in the Swamp, 29-26. A back-and-forth game led to a tense finish with Utah quarterback Cameron Rising throwing a game-ending interception on the goal line to seal the victory for the Gators with under 30 seconds remaining. After garnering quite a bit of attention throughout the offseason as a Top 15 NFL Draft prospect, Florida quarterback Anthony Richardson does look to be better equipped this season than in the past.

All that goes to say, when it comes to the SEC East, that’s where the headlines are at coming out of the first weekend.

“I think Florida has a big year,” former Alabama championship-winning quarterback and current ESPN analyst AJ McCarron said on Saturday night after Florida’s win. “I think they’re the surprise in the east, of the SEC. I have them going 11-1 on the year. I think their only loss is to Georgia. I think they beat Tennessee, A&M, LSU. I think Florida is poised for a big breakout year this year.”

The headlines on Sunday are mainly in Gainesville and Athens. They’re even in Austin, TX now that Texas is set to host College GameDay’s week two location with a matchup against Alabama on the horizon. But they’re not in Knoxville – and that’s okay.

This Tennessee team is not a team that is motivated by weekly storylines, national publicity, or power ranking segments on the SEC Network. They’re focused on their next opponent. It’s only a matter of time until it is used this year, but time and time again last year, Heupel would reiterate the line that Tennessee’s most important opponent of the season was their next one.

“Obviously, I’m super excited because there’s a lot of preseason talk, there are a lot of watch lists, rankings, predictions, and everything like that,” Tennessee tight end Jacob Warren said before the start of the season. “That’s exciting, but what we’re here to do is we’re here to play ball, so that’s kind of what we get to do this weekend. We don’t have to play our own teammates; we can really go hit somebody else. We’re excited to just get out there and see what the preparation leads to.”

While teams like Florida, Georgia, and Texas gobble up the week one headlines, Tennessee is in a perfectly comfortable – and familiar – place under the radar. Not to mention, Tennessee still has a big-time matchup against Pittsburgh coming up this week, which will likely be a Top 25 ranked matchup on the road. After Florida and Georgia both picked up a non-conference ranked win during week one, a win for Tennessee over Pittsburgh suddenly just became that much more valuable.

Tennessee and Pittsburgh will square off at 3:30 p.m. ET on ABC this upcoming Saturday afternoon.