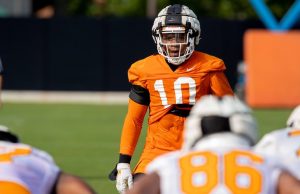 The linebacker group was certainly an interesting position on the Tennessee defense to watch during training camp. On the one hand, former Texas transfer Juwan Mitchell was back on the field for the Vols after missing most of his debut season in Knoxville due to an injury. And on the other hand, Tennessee was returning both of their starting linebackers from last season in Jeremy Banks and Aaron Beasley, which allows for continuity among the starters on the roster.

However, as the group continued to progress throughout the month of August, one of Tennessee’s linebackers hit an obstacle within the last week. After being listed as a potential starter entering Tennessee’s season opener on Thursday, linebacker Juwan Mitchell was ruled out for the game just about half an hour before kickoff.

Tennessee head coach Josh Heupel did not provide much information immediately following the game, just saying that Mitchell was “not able to go in this one.”

While opening up Tennessee’s second week of the season on Monday, Heupel did not have much more of an update on the status of Juwan Mitchell. All we know as of now is that Mitchell has not already been ruled out for the game.

“Juwan’s ability to be able to be healthy enough to play for us, we’ll find out here at the end of the week,” Heupel said on Monday.

While he wasn’t able to provide much on the return – better yet, season debut – of Juwan Mitchell, Heupel was very complimentary of linebacker Aaron Beasley. The senior linebacker ended the game as Tennessee’s second-leading tackler with eight total tackles – six unassisted and one assisted. Beasley also recorded one of Tennessee’s seven quarterback hurries on the day.

“Beasley played extremely well,” Heupel said on Monday. “I thought you could see him, just his growth from a year ago to who he was on the football field on Thursday night. Really liked a lot of what we saw from him.”

Linebacker Jeremy Banks, a veteran of the Tennessee defense with 12 total career starts, was also in the Vols’ starting lineup on Thursday, to the surprise of no one. Banks ended the game with six tackles, two of them coming unassisted.

“I thought the (line)backers as a whole, in particular the first string of guys that got action, played fast, played physical, had their eyes in the right place and tackled well,” Heupel said about the position group as a whole on Monday.

Going back to his first season in Knoxville, Heupel very often held his cards close to his chest when it came to injuries. While he would routinely be asked about injured players during appearances on Monday or Wednesday, usually, the answer would be directed towards an evaluation that is set to happen at the end of the week. And now that we’re here with one of our first major injuries of the 2022 season, it looks like Heupel is going to follow the same route as last year.

Josh Heupel’s next appearance with the media will be on Wednesday during the SEC coaches teleconference call.

After defeating Ball State in the season opener last Thursday, Tennessee is now set for a matchup with Top 25-ranked Pittsburgh this Saturday afternoon.