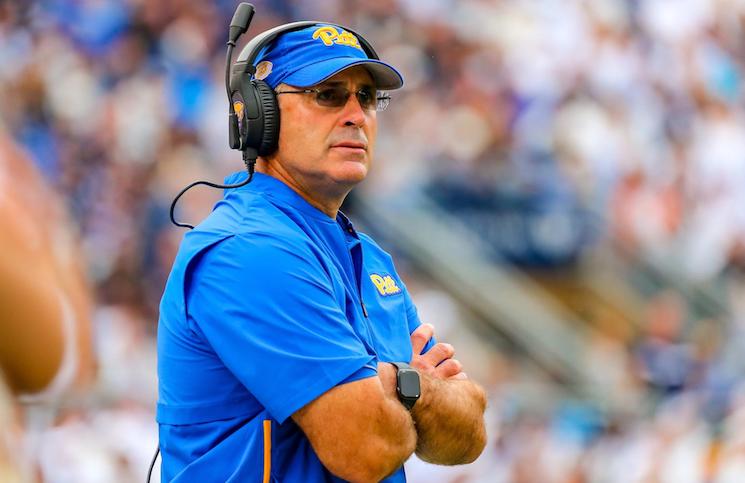 That’s not a major burden for the eighth year Pitt coach. The former defensive coordinator’s Panthers defense runs an abundance of man coverage. Heupel commented on the need to be ready for it, but that ability to play man doesn’t stop the challenges the Vols’ offense presents.

“Their favorite formation is having two detached receivers and the offensive line, quarterback and running back are going to be in this little podium area here and then everybody else is going to be lined up way out there. That’s what they do. Spread you out. So it is a spread you out, fast tempo offense.”

Narduzzi’s Panthers won two of the first three meetings, splitting matchups against UCF and winning round one of the Johnny Majors Classic last season in Knoxville.

While Narduzzi has gotten the upper hand in two of three matchups, the former Michigan State defensive coordinator showed great respect for Heupel and his offensive system Monday.

“Coach Heupel does a great job,” Narduzzi said. “He’s a football coach. Offensively, there’s not a more explosive offense. There’s not a faster tempo offense in the country. Alex Golesh is also their offensive coordinator but I think Heupel kind of does most of it, but Alex is a good coach as well. They’re good. They’re going to snap the ball within seven-to-12 seconds 75% of the time.”

While Narduzzi wasn’t looking to give Tennessee any bulletin board material, Las Vegas sports books gave the Panthers just that. The Vols opened as 4.5-point road favorites with the line quickly moving up to 6.5.

Narduzzi noted that he would inform his team of the line, that he would like to be an underdog every game and facetiously commenting on the perception of the ACC compared to SEC.

“We are in the Pee Wee league, we will line up and see if we can play,” Narduzzi said.

Volunteer quarterback Hendon Hooker started two games against Pitt, a 28-0 win and 47-14 loss, while at Virginia Tech before coming off the bench to play three quarters a season ago.

Narduzzi’s seen great growth from Hooker in his time at Virginia Tech to Tennessee, even joking that the Panthers have faced Hooker “the last 12 years.”

“He’s got a great arm,” Narduzzi said. “He’s smart. You look at where he is right now compared to where he was two years ago when he was at Virginia Tech— two totally different guys. … He fits into that offense and his quarterback coach is coaching the heck out of him. I think he’s really really sharp.”