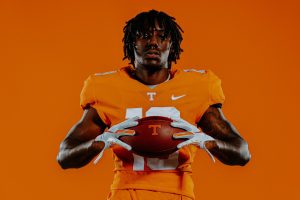 Besides the 49-point victory to open the season, one of the most beneficial aspects of Tennessee’s blowout win over Ball State to start the season is the sheer amount of players that Tennessee was able to rotate in. From backup defensive backs to freshman wide receivers, Tennessee was able to get plenty of guys on-field experience before the Vols’ ranked matchup with Pittsburgh this coming weekend.

The Volunteers played 29 players on defense against Ball State, with several players like Tamarion McDonald establishing themselves as future playmakers on the team. However, one of the most notable players from Tennessee’s week one win was cornerback Kamal Hadden.

While Hadden is not necessarily a Tennessee newcomer, he doesn’t have a whole ton of playing experience with the Vols. The River Rouge, Michigan native did play in seven games for Tennessee with two starts last season but wasn’t one of Tennessee’s top pieces on the defense with players like Alontae Taylor and Theo Jackson holding down spots.

Hadden originally began his career with a one-year run at Independence Community College and quickly became one of the top defensive backs in the junior college ranks. Hadden committed to Auburn in late 2020, but after one spring camp with the Tigers, Hadden decided to make another switch. Later that summer, in June 2021, Hadden officially transferred and enrolled at the University of Tennessee.

Given the start at cornerback for Tennessee on Thursday, Hadden did a great job with what he saw. Hadden ended the game with three tackles, one pick, and was listed as Tennessee’s highest-rated player from the Pro Football Focus ratings.

“Kamal did a really nice job,” Tennessee head coach Josh Heupel said on Monday. “You mentioned him having a short amount of time in training camp. Since he’s come back, he’s handled himself and grown in a great way. He handled himself really mature while he was out, took it upon himself to kind of act like a coach and essentially give a report card to coach (Willie) Martinez on some of the guys during the course of practice. I think that kept him engaged in understanding what we’re doing. Performed really well the other night. Obviously, everybody saw the pick, but I thought he did the things that we were asking him to in some trap corner situations, coming up and being physical. A lot of positives.”

Based on his play from Thursday, Kamal Hadden is already looking like an impact defensive back for the Tennessee defense.

Another player that was able to make some noise on Thursday night was wide receiver Jimmy Holiday. Similar to Hadden, Holiday is no newcomer to the Tennessee team. However, at the same time, Holiday also hasn’t been an impact player for Tennessee’s offense with solid depth above him in the past.

After his performance on Thursday, though, Holiday showed exactly why so many were raving about his work throughout the offseason.

Holiday finished the game with four receptions, 62 yards, and one touchdown – putting him as the second-leading receiver for Tennessee on Thursday. The Flora, Mississippi native and junior wide receiver had an extremely impressive 53-yard touchdown catch where he made a picture-perfect cut on a textbook route to haul in the pass from quarterback Joe Milton III.

“He operated really efficient and got himself lined up, understood coverages on the back end,” Heupel said about Holiday on Monday. “I was able to catch him running a little bit on a perimeter screen. Obviously, the dig route that he was able to score a touchdown on was a big play for him and for us. He’s somebody that just continues to get better inside of our system and really just fundamentally, having played that position for a very short amount of time—having played quarterback and transitioning outside. Saw him show up in special teams, too. That’s something they did a year ago, but he’s a better player on those units right now than he was at that time. I expect him to continue to grow and to have a huge impact inside of our program.”

Tennessee has a stacked wide receiver room this year. Jalin Hyatt looked great in his first game of the season, Walker Merrill emerged with a touchdown on a great route, Cedric Tillman looks poised for another big season, and even transfer wide receiver Bru McCoy found some success in his first game in a Tennessee uniform. That’s without even mentioning speedsters such as Jimmy Calloway and Squirrel White.

But at the end of the day, Jimmy Holiday looks like another guy that is going to compete for playing time this year and can be used very efficiently in the right ways. As Heupel said himself, he expects Holiday to have a “huge impact” within the program.

Tennessee got off to a great start with a 59-10 win in week one against Ball State. The Volunteers will now gear up for a showdown with Top 25-ranked Pittsburgh this upcoming Saturday.