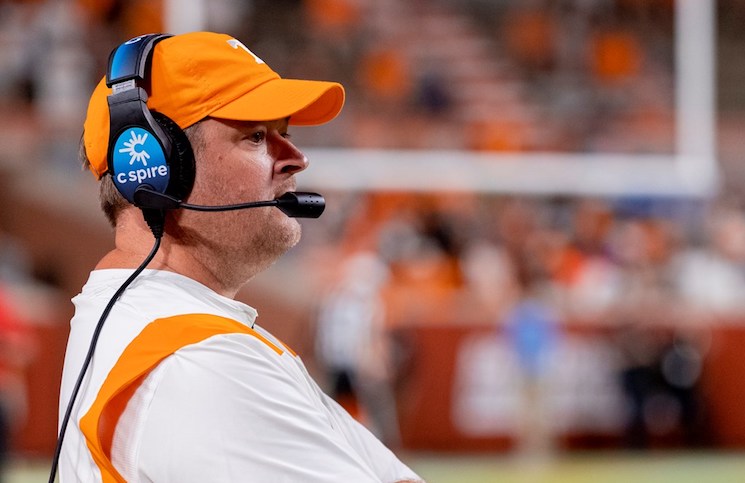 The Vols’ head coach previewed his team’s road trip to Pittsburgh, talked the unimportance of rankings this early in the season and more.

Here’s everything Heupel said ahead of round two of the Johnny Majors Classic.

Heupel opening statement: “Really excited for our football team. We’re facing a very good team on the road. Excited to go compete with our guys. We’ve had a good week of practice so far and we look forward to finishing our preparation before we head out to Pittsburgh later this week. We faced them a year ago and understand who they are and what they’re about. We’re excited to go show who we are and excited to go play this weekend.”

Question: Is there any value in Hendon self scouting since he’s facing Pittsburgh for the fourth straight year?

Q: How much can tendency change in a quarterback over their career?

A: Fundamentally you can drastically change your fundamentals of what you’re doing. In particular with your lower body. That’s a part of his (Hendon’s) ability to be accurate with the football and drive the football in a different way than he was when he first got here transferring from VT.

Q: Is there a different kind of excitement entering this top 25 matchup?

A: As far as rankings, those things don’t matter at this point. The challenge for us is to prepare the right way and be our best and go compete fiercely on Saturday. Not go up and down with the flow of the football game but be aggressive and be a great competitor for 60 minutes. That’s one of the things I talked to our guys about today as we finished up practice. The excitement is we understand they’re a really good team. A football team that we played a year ago. We have a good understanding of who they are at their core. They’re physical, they’re tough, they’re a smart football team. Some of the things we did in the ball game a year ago we can’t afford to do. We need to show that type of growth. This is the next game in this journey for us this year. Our guys have been really good. Are they excited about it? Absolutely. I think they’ve prepared in a really good way.

Q: Is it true that coaches don’t want their team to peak on a Tuesday or Wednesday when they play on a Saturday? Have you experienced that before?

A: The energy of a game day is different than your energy and focus over the course of practice. We need to be focused. We need to be intentional but the game’s not today. We’ve got to continue to build that over the course of the week. For us,  we just finished our Wednesday practice since we practice in the morning. I feel like the last few days have been really good. They’ve been intentional. We haven’t been perfect and honestly you’re never going to be perfect over the course of practice. A big part of us playing well on Saturday is winning this next 72 hours and getting ourselves prepared. We’re in the mental preparation here as we build towards kick off.

A: Whether you’re up or down, we’re trying to focus on playing each play independent, man, and competing in a fierce way. I thought our kids did that in a really good way last Thursday. I say that, there’s some young guys who got put in the ball game and them getting an opportunity and they’re a little bit not focused and all of a sudden it gets really sloppy real quick. Obviously, there was the one offensive period where we turned it over with our young guys that we’d like back but I thought for the most part our focus and the way that we competed over the course of the ball game was really positive. One of the things I noticed was just how invested some of our starters were when they were on the sideline and it was the young guys turn. They were into the game like they were ready to go back out there and play. That speaks to a little bit of our growth and maturity compared to where we were a year ago.

Q: How did you assess Hendon Hooker’s decision making in game one?

Q: What did you see from Kedon Slovis against West Virginia?

A: Kedon plays extremely smart. He’s got a real good grasp of what they’re trying to do. We’ve got to do a good job of handling the play action pass in this football game and getting them off of schedule. Obviously, he has a ton of experience. He’s new in what they’re doing at Pitt but he’s played a lot of football.

Q: What have you seen from Bru McCoy? How is he fitting in your system?

A: Bru is smart, tough and competitive. Focused, is getting better every day we’re out on the practice field. I thought for sure in his first game action and what we’re doing offensively, he handled himself in a really mature way and I’m just talking about everything from the whistle of the previous play to the next snap. I thought when the ball was in his hands he competed fiercely and did a good job structure wise and showed a lot of growth from when he first got here. Really excited about his continued growth over this season.