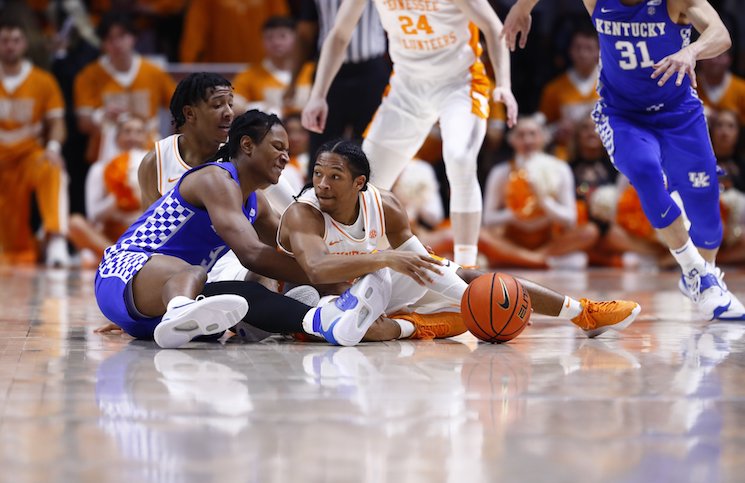 Kentucky’s made a point of adding checkerboard to its branding profile in past years, adding blue checkerboard in its end zone design and adding a large checkerboard stripe on the side of its basketball uniforms.

The additions made for a fun joking point in the border rivalry as the Wildcats tried to include a classic Tennessee design in their athletic department.

After Tennessee rolled Kentucky, 73-60, inside Thompson-Boling Arena last February the Vol Hoops Twitter account had some fun, tweeting a cease and desist at Kentucky for stealing the patented Tennessee checkerboard.

A closer look at our new home uniforms 👀 pic.twitter.com/KqTrtxqn5d

The Tennessee basketball Twitter, in turn, retweeted the aforementioned Tweet from February. The cease and desist troll came to the top of the timeline for the 252.1 thousand accounts following Tennessee as the Wildcats gave in to the pressure.

Since Barnes’ arrival, Tennessee is 10-7 against the Wildcats in two seasons including a victory in the 2022 SEC Tournament Semifinals. The win moved the Vols to 2-1 on the season against their northern rival and set the stage for the program’s first SEC Tournament Championship since 1979.

Tennessee has beaten Kentucky in each of Barnes’ seven years including multiple victories in 2018, 2019 and 2022. Barnes has been more successful against the SEC’s best historical basketball program than any other Volunteer coach.

Since Barnes’ arrival, Tennessee is 5-2 against Kentucky in Thompson-Boling Arena, 3-4 at Rupp Arena and 2-1 in the SEC Tournament (wins in Nashville and Tampa, loss in St. Louis).