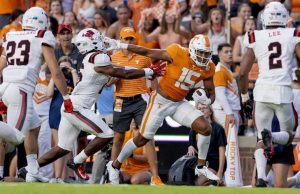 After quite a saga to just get on the field for Tennessee, Vols wide receiver Bru McCoy scored the first touchdown of his Big Orange career on Saturday afternoon against Pittsburgh.

With 10 minutes remaining in the second quarter and Tennessee trailing by 10, McCoy sprinted down the Pittsburgh sideline towards the endzone. Tennessee quarterback Hendon Hooker threw a high, arching pass and it landed right in McCoy’s arms for six.

After the play, Pittsburgh head coach Pat Narduzzi challenged the ruling on the field, claiming that McCoy was ineligible because he stepped out of bounds en route to catching the ball. The call was eventually confirmed because while a Pittsburgh player did force McCoy out of bounds, the Tennessee wideout then worked to reestablish himself in bounds before catching the ball in the endzone.

The game between No. 17 Pittsburgh and No. 24 Tennessee is currently at halftime at the time of this publication. The Vols are leading the Panthers at the break by a score of 24-17.

McCoy is the second-leading receiver for the Volunteers with 39 yards and one touchdown on two receptions. Tennessee wide receiver Cedric Tillman is currently leading the Vols’ receivers at the half with 111 yards on six receptions.

Stay tuned to @RockyTopInsider on Twitter for more coverage from the Tennessee vs Pittsburgh game.

Tennessee goes on a 17-0 run to close the half there in the second quarter.