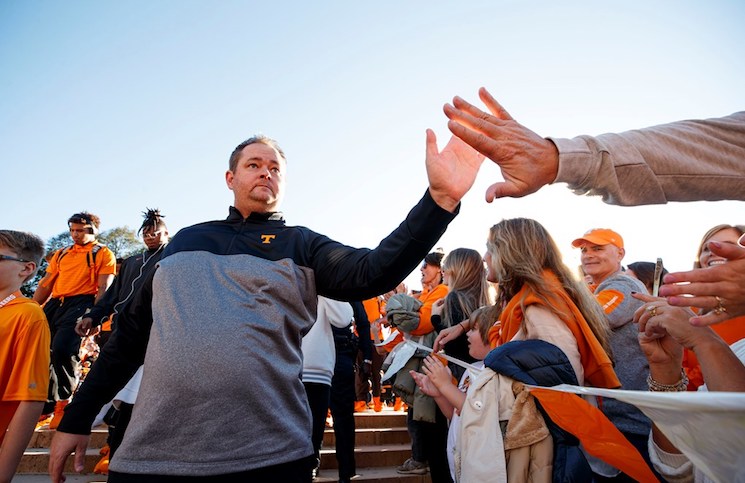 Tennessee earned its second road top 25 win of the Josh Heupel era and its first road win of the season Saturday as the Vols knocked off No. 17 Pitt, 34-27, in overtime.

The Vols got off to a poor start, falling behind 10-0 early, before scoring three touchdowns on as many drives and scoring the final 17 points of the first half to take a seven-point lead into the break.

Pitt quarterback Kedon Slovis exited the game due to injury on the Panthers’ final offensive play of first half and the Panthers’ offense struggled mightily after the fact.

More From RTI: Five Quick Takeaways On A Thriller

Still, Tennessee couldn’t put the Panthers away as bountiful mistakes gave Pitt life. Tennessee fumbled, muffed a punt and had a punt blocked in a poorly played second half.

“It says that there’s a lot of learning that needs to go on,” Heupel said. “The fumbles can’t happen, the blocked punt can’t happen. It’s us as coaches and players continuing to get better. We have to make those strides really quickly.”

After Pitt scored the second half’s lone touchdown to force overtime, Tennessee made winning plays. Cedric Tillman grabbed a 28-yard touchdown to take the lead in the first overtime and Tennessee’s defense made one more stop to secure the win.

“The defensive effort, just in general, absolutely relentless,” Heupel said. “I said it early with the second, third and fourth quarter were as good as a performance as I’ve been around in a long time. They got put in a lot of bad positions from turnovers, short fields, special teams. They reset, they played. They were physical in the front four and their pressures were relentless on the quarterback all night long.”

Hear what all Heupel had to say about the win here.