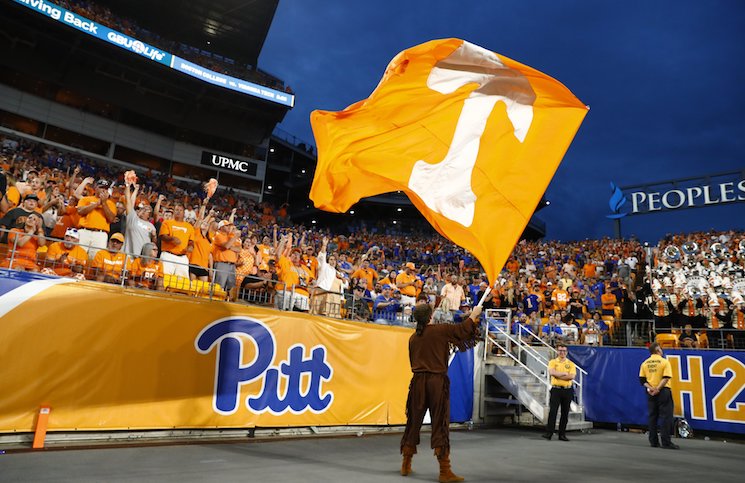 PITTSBURGH, PA — Tennessee did not play a particularly good game in its, 34-27, overtime win at No. 17 Pitt Saturday afternoon.

In fact, there aren’t many teams in the country that can make as many mistakes as Tennessee did and beat a top 25 team on the road. But that is exactly what the Vols did in the Steel City.

“A year ago a game like this, the ups and downs, I don’t think we would have handled it in the way we would need to to come out on top. To just keep playing,” Tennessee head coach Josh Heupel said postgame.

Tennessee’s offense didn’t play anywhere near its potential, scoring touchdowns on three consecutive first half drives before scoring just three second half points and six points the rest of the game. The Vols’ 27 points in regulation were the fewest in Josh Heupel’s four matchups as a head coach against Pitt coach Pat Narduzzi.

Then there were the countless self inflicted second half errors. After Pitt quarterback Nick Patte replaced the injured Kedon Slovis, the Vols defense dominated. Leading by seven at the break, Tennessee’s offense was in prime position to run away with the game.

Instead the offense stalled and Tennessee continuously shot itself in the foot. Pitt blocked a punt then Jaylen Wright fumbled after moving the sticks on a third down run. Finally, Trevon Flowers muffed a punt midway through the fourth quarter.

The third second half turnover proved most costly. Pitt converted two fourth downs on a 10 play, 39-yard touchdown drive that tied the game with less than three minutes to play.

Still, Tennessee avoided complete catastrophe hanging on to win in overtime thanks to a 28-yard Cedric Tillman touchdown and a defensive stop.

“We’re far from being a finished product,” Heupel said. “We have a long way to go, coaches and players alike to keep getting to where we’re capable of being. The growth and maturity and competitiveness is so different from when we first took over.

“They’ve become, not perfect, but so much more consistent in who they are everyday. This is a program win. It takes everybody.”

There are certainly aspects of Tennessee’s performance that are cause for concern. But those concerns are more enjoyable to address following the program’s second top 20 road win of the last decade.

And as Heupel said, this is a game Tennessee likely loses last season, so there will be no somber faces in the Anderson Football Complex Sunday.

“Every time you step on the field they have 85 scholarships and they got good coaches too,” Heupel said. “You don’t take any of it for granted. You can’t do that in your preparation and you can’t do it after it. You gotta enjoy the wins however how pretty or not pretty a win might be. You better enjoy it. They’re hard to come by.”

The obvious caveat to the road non conference win is that Pitt was without Slovis in the second half. Still, backup quarterbacks have shined against Tennessee in the past.

Memories of Treon Harris and even Maty Mauk surely bounced around more than one Vol fan’s head as Patte entered to open the second half.

A win is a win and Tennessee heads home to Knoxville 2-0 on the young season.