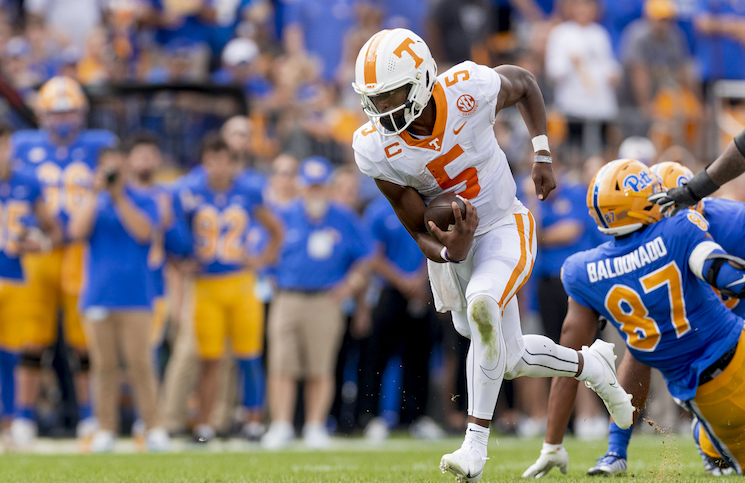 Pitt jumped out to an early lead before Tennessee claimed the lead with a huge second quarter. The Vols made too many mistakes to finish the job in regulation as Tennessee outlasted the Panthers in overtime.

Here are the five critical moments that led to Tennessee’s first top 25 win of the season.

Tennessee was reeling when Kamal Hadden deflected and Trevon Flowers intercepted a Kedon Slovis pass in the end zone with 4:16 to play in the first quarter.

Pitt led 10-0 and was on the hunt for more, facing third-and-10 at Tennessee’s 21-yard line. Slovis left the pocket and fired to Bub Means as Aaron Beasley knocked him to the turf.

Heupel admitted after the game that Tennessee “got our feet underneath us after that” Flowers interception.

After going three-and-out in two of its first three drives, Tennessee reeled off three straight touchdown drives to claim a second quarter lead.

Tennessee claimed the lead in the second quarter, but that lead looked like it would be just four-points when the Vols punted back to Pitt with less than 30 seconds remaining in the first half.

Out of timeouts and not even putting a return man back on the prior punt, Pitt seemed content to take the game to halftime.

Instead, Pitt coach Pat Narduzzi was aggressive, airing it out on first down. The Vols made him pay, playing great coverage while Tyler Baron made his biggest play on a big day for the junior defensive end.

Baron strip sacked Slovis and after Hendon Hooker briefly threw an interception to M.J. Devonshire — the play was eventually ruled incomplete — Chase McGrath booted in a 37-yard field goal to end the half.

It also proved to be Slovis last snap of the Johnny Majors Classic as he left the game with an undisclosed injury.

When Tennessee’s offense faltered in the second half, the three points seemed even larger than they did initially.

An Easily Forgotten Conversion And Kick

There was little to remember from a mostly putrid offensive second half from Tennessee. But the struggles highlighted the Vols’ lone second half scoring drive.

Bru McCoy made one of the biggest play of the game then, catching a comeback route two yards short of the yard to gain and bullying a Pitt corner to pick up the first down.

The drive eventually stalled out after a Cedric Tillman drop on second down and a Pitt third down sack nearly knocked Tennessee out of field goal range.

“Nearly” is the key word as McGrath booted in a 51-yard field goal, the longest made kick of his Tennessee tenure.

Both plays can easily be glossed over, but the early fourth quarter drive was crucial to Tennessee picking up the win.

The Muffed Punt And Fourth Down Conversions

Pitt’s offense was seriously handicapped with Nick Patti at quarterback. With Pitt punting the ball back to Tennessee with just under eight minutes remaining the Vols were in a great spot.

A score would almost seal a win and at the worst the Vols would have strong field position and could pin Pitt deep, making Patti work the Panthers’ offense down the field.

Flowers roller coaster evening instead hit its lowest point as the senior safety muffed the punt, allowing Pitt to take over inside the Vols’ 40-yard line.

The Panthers proceeded to go on a 10 play, 39-yard game tying touchdown drive that included a fourth-and-one and fourth-and-goal at the five-yard line conversion.

The game’s lone second half touchdown could have proved extremely costly as it forced overtime.

Hendon Hooker galloped into the end zone on the second play of the overtime period. The one problem— the officials called Gerald Mincey for holding.

Tennessee went from a prime second-and-three to behind the sticks on second-and-13. No problem for the struggling Volunteer offense.

Hendon Hooker climbed the ladder and fired to his go-to receiver down the field. Cedric Tillman boxed out his man in the end zone, hauling in his ninth catch of the game. The ninth catch was good for 28 yards and a touchdown.

Pitt had already converted another fourth down in overtime when Patti lined up under center on third-and-goal at the eight yard line.

Vols’ defensive coordinator Tim Banks drew up the safety blitz and Flowers came around the right end untouched, sacking the Pitt quarterback at the 20-yard line.

When Patti’s ensuing fourth down pass fell incomplete, Flowers’ rollercoaster night ended on a high and the Vols exited the Steel City victors.