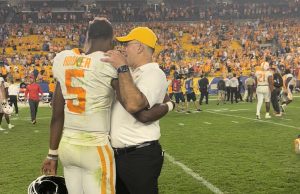 As Hooker was making his way back to the Tennessee sideline, Pittsburgh head coach Pat Narduzzi tracked him down to give him a hug and share some private words. The two talked for a quick minute before going their separate ways, but it looked like a fun conversation after the history the two have had.

Hendon Hooker and Pat Narduzzi have stood across the sidelines from each other on four different occasions now: two with Hooker playing for Virginia Tech, and the most recent two with Tennessee.

In Hooker’s first matchup with Narduzzi and Pittsburgh in 2019 as the quarterback of Virginia Tech, Hooker completed 10-of-13 passes for 153 yards and two touchdowns. One year later, with the Hokies traveling to Pittsburgh, Hooker went 13-of-22 for 260 yards, two touchdowns, and one interception. Hooker found a win in his 2019 meeting but Virginia Tech did lose the 2020 matchup.

On Saturday night, in his final matchup against Pat Narduzzi’s Pittsburgh Panthers, Hooker went 27-of-42 for 325 yards and two touchdowns. Hooker also added in 27 yards on the ground in the victory. Hooker now ends his career with a 2-2 record against Pittsburgh.

Pat Narduzzi wasn’t the only coach that Hooker talked to after the game. The Tennessee quarterback spent quite a bit of time showing his respect to the other players, who did the same for him.

In the footsteps of #Tennessee QB Hendon Hooker after the Vols took down Pittsburgh on the road. pic.twitter.com/Sp273HQGyS

No. 24 Tennessee defeated No. 17 Pittsburgh on the road in Acisure Stadium on Saturday afternoon by a score of 34-27 in overtime. The Vols now move to 2-0 with a matchup against Akron on the horizon for next Saturday night.