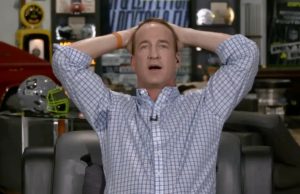 Peyton Manning on the NFL Monday Night MegaCast in 2021. Photo via ESPN NFL (@ESPNNFL) on Twitter.

The Monday Night ManningCast is back for its second season on ESPN and the first game of the season did not disappoint. Hosts Peyton and Eli Manning were back in their normal sports for the game and welcomed in a number of celebrity guests along the way.

While there certainly were great moments from the first episode, the most talked about moment came at the end of the game.

Along with Shannon Sharpe, the Manning brothers were watching the Broncos’ offense drive down the field, down by one point, with just over a minute remaining on the clock. Broncos quarterback Russell Wilson completed a pass that went to the Seahawks’ 46-yard line to bring up 4th and 5 with just about 60 seconds remaining in the game.

More from RTI: Jalin Hyatt Explains Why Vols Play So Hard For Heupel

But as Manning kept talking, the clock just kept winding down.

Nope. That wasn’t what was happening. Peyton was begging for a timeout to be called. Eventually, one finally was, when the play clock hit zero. The Hall of Fame quarterback immediately put up the classic “surrender cobra” gesture in utter clock-management disgust.

You can see the gears turning in Peyton Manning’s brain as he tried to figure out just what the Broncos’ coaching staff was doing.

“They’re going to kick it,” Manning mumbled out as he realized what was going on.

“Kick what?!” Shannon Sharpe yelled out.

Check out the full clip below:

Peyton Manning was disgusted by the ending of last night’s game 🤣 pic.twitter.com/Lw8plHuDV1

The Broncos had three timeouts and could have risked the fourth down to move up the chains. Instead, Denver elected to attempt the 64-yard field goal, which would eventually miss.

The Seahawks defeated the Broncos by a score of 17 to 16 to close down week one of the NFL season.

The Seahawks/Broncos matchup also featured the same teams that were in the Super Bowl for Peyton’s first championship game with Denver. While the score was far different than the 2022 meeting, the Broncos wound up losing both games.

The ManningCast is back and Peyton Manning already looks to be in prime mid-season form with his reactions. This should undoubtedly be a fun season ahead.