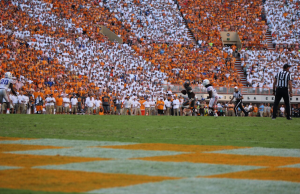 We all knew it would happen sooner or later, but it is officially here. The desire for Checker Neyland is back.

After Tennessee’s 2-0 start to the season and a likely win on the horizon against Akron, Tennessee could potentially be headed into week four against Florida with an undefeated record.

While that game didn’t need any more added excitement besides the two teams on the card, Tennessee’s hot start to the season and the potential of a Top 25 matchup against the Gators have already turned this game into the talk of the town.

People have started to throw out the idea of doing Checker Neyland for the Florida game on social media, which has started to gain more and more attention.

VolShop’s Twitter was one of the first big accounts to tease the idea of Checker Neyland by posting two new Florida-specific shirts in identical orange and white colors – because, you know, just in case.

Twitter user Ashley tweeted to the Vol Shop, “So you’re saying you too want to checker Neyland? @AD_DannyWhite we promise to behave can we please make this official?”

Tennessee Athletic Director Danny White responded to the tweet with a funny, sly tease to the Vol fanbase: “Y’all promise…?”

The reference that is being hinted at in the conversation goes back to the last time Tennessee did the Checker Neyland effect… the infamous 2021 Ole Miss game.

If you ask any Tennessee fan, they remember that game by the fourth-down passing play for Jacob Warren that the officials called short in the fourth quarter. The national story, though, was centered around the trash and debris that was being thrown on the field after that particular call was made. One way or another, it’s a game that few will be forgetting for quite some time.

The Tennessee fanbase has had the Florida game circled on the calendar for a while now. After Florida’s lopsided victory over Tennessee in the swamp last season, the Gators now come to Knoxville for what is expected to be one of the rowdiest games on Tennessee’s schedule.

Checker Neyland is one of the best football stadium atmospheres in the country. It’s up there with Penn State’s White Out as one of the most recognizable scenes in the country, too. Here’s the thing. Tennessee will have recruits at that game, and recruits love the lights and big-time environments. Recruits turn into enrollees that help win games.

What do you think? Do you want to see Tennessee do Checker Neyland for the Florida game? Sound off in the comments below!