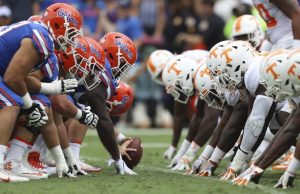 The not-so-surprising news of the week has officially become official.

According to a tweet from Tennessee Football on Wednesday afternoon, the Vols’ Sept. 24 SEC-opening matchup with Florida inside of Neyland Stadium is officially a sellout.

Earlier this week, it was announced that Tennessee’s game against Florida will be an afternoon game at 3:30 p.m. ET.

Now, the Vols may even be closing in on back-to-back weeks.

On Tuesday evening, Tennessee AD Danny White announced on Twitter that Tennessee was closing in on a sellout for the Akron game. While there has been no official word at the time of this publication, if it does happen, Tennessee will be looking at back-to-back Neyland sellouts.

If Tennessee and Florida win their respective games this week, the matchup between the Vols and Gators on Sept. 24 will almost definitely be a Top 25, likely even a Top 20 matchup.