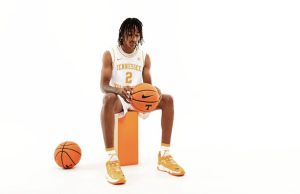 Tennessee is set to host a Top 100 class of 2024 basketball recruit this fall.

According to a report from 24/7 High School Hoops on Wednesday, four-star shooting guard Jayden “Juke” Harris is set to visit the Tennessee basketball program from Oct. 14-15.

This will be Harris’ second visit to Knoxville. The 6-foot-4, 175-pound shooting guard had an unofficial visit with the Vols back in early July.

Harris has taken a handful of unofficial visits so far through 2022, including NC State, Tennessee, Wake Forest, and Virginia. However, with the talent that Harris has at the guard position, he told On3 Sports last week that he has been talking to plenty of schools and how each one of them is unique in some way or another.

According to 247 Sports, Harris has already racked up more than 20 scholarship offers.

More from RTI: It’s Official… Tennessee Has Sold Out Neyland Stadium for the Florida Game

As one of the first teams to have offered Harris a scholarship, Tennessee does seem to have made an impact on Harris’ recruitment so far. Harris told On3 that the U.T. coach’s dedication to his work on the high school scene has really been noticeable.

“I’ve been talking a lot with coach (Justin) Gainey,” Harris said via On3. “He has been making sure I’m doing well. He came to literally every single game I played in California, and I noticed that.”

There’s no real indication yet as to who the favorites are in Harris’ recruitment. Although he does have a few standouts in mind already, it seems to be anyone’s game at the moment as he continues to talk with schools and decide where he wants to eventually take his official visits.

One way or another, it looks like Juke Harris will be heading back up to Knoxville for a second time this October.

Check out a highlight tape from class of 2024 shooting guard Juke Harris below.