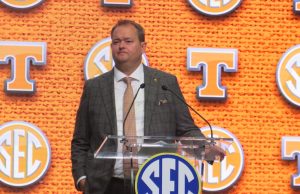 According to a report from On3 Sports’ VolQuest on Friday morning, Tennessee HC Josh Heupel received a $1 million raise, which increases his annual salary to $5 million. Heupel’s guaranteed $5 million dollar contract will run through Jan. 31, 2028.

Heupel’s original contract was set at $4 million per year and ran through Jan. 31, 2027. Now, Heupel adds one year and a million dollars to each year.

Tennessee’s assistant coaches have also been given a raise and one-year contract extensions.

Heupel officially took over the Tennessee football program in January of 2021. The former UCF head coach immediately faced a tough challenge with the investigation that was surrounding Tennessee, yet still was able to change the culture and rally the troops en route to a winning season in his first year.

Heupel’s Vols, with a depleted roster due to the transfer portal, finished the 2021 season with a 7-5 regular season record, a ranked road win against No. 18 Kentucky, and a loss in overtime of the Music City Bowl.

Josh Heupel has led the Vols to a 2-0 record to start his second season in Knoxville. Tennessee will host Akron and Florida in back-to-back home matchups coming up before the bye week.

More from RTI: Josh Heupel ‘Hopeful’ A Pair Of Vols Will Make Season Debut Against Akron

No. 15 Tennessee will host Akron this Saturday night at 7:00 p.m. ET in Neyland Stadium.