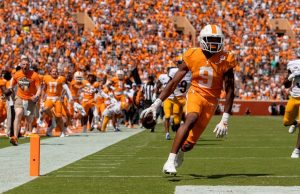 Tennessee wide receiver Jimmy Calloway was ejected in the third quarter of the contest against Akron on Saturday night in Knoxville.

With about three minutes remaining in the third quarter, Calloway got mixed up with Akron defensive back Tyson Durant near the sideline. Calloway wound up throwing a handful of punches at Durant with a few of them landing clean on Durant’s helmet.

After the situation on the field unfolded, Calloway was immediately taken back to the Tennessee locker room. The redshirt-sophomore wide receiver was hit with two unsportsmanlike conduct penalties from the aggressive play, resulting in his ejection from the contest. Akron was also given an unsportsmanlike conduct penalty after the play – but only one.

Jimmy Calloway what the hell did I just watch? 💀 pic.twitter.com/wUp2O0ufg3

“Just disappointing because it takes away from the rest of the football game,” Heupel said. “It’s not who we are and what we stand for in any area of our program. He’s (Calloway) disappointed, too. In what happened. Teachable moment for everybody. Can’t do it. We’re not going to be able to do that and beat good football teams here as we get into conference play. You can’t do anything that takes away from the team, that hurts the team.”

Prior to his ejection from the game, Jimmy Calloway had two receptions for 20 yards on three targets.

At the time of this publication, with 12 minutes remaining in the fourth quarter, No. 15 Tennessee leads Akron by a score of 56-3.

Jimmy Calloway very well could be looking at a suspension from the Tennessee football team. However, at the time of this publication, nothing has been announced or revealed.

This story will continue to be updated throughout the evening.