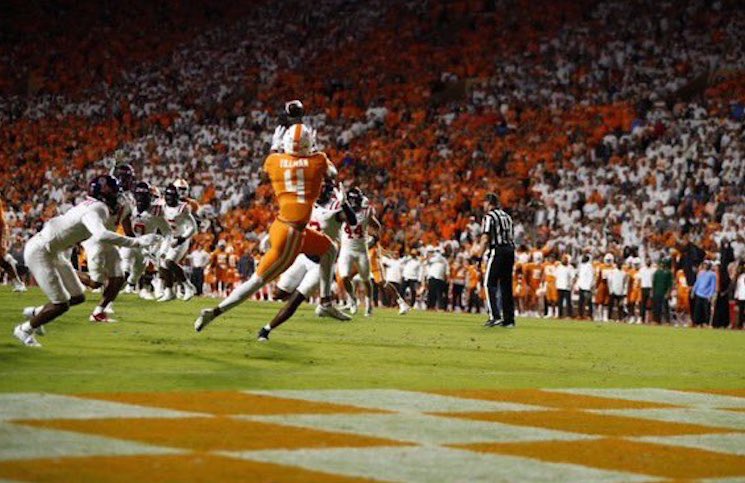 Winning and staying healthy are always the two most important things when a SEC school hosts a lesser opponent.

Tennessee took care of step one easily, jumping out to a 42-0 lead before cruising to a 63-6 victory over Akron.

How did the Vols do on step two? Well, that’s still to be determined.

Two Volunteer starters — Jabari Small and Cedric Tillman — exited the game with injuries in the first half and didn’t return.

Heupel told the SEC Network sideline reporter that he was hopeful that neither were long term injuries before being noncommittal with the media postgame.

“Ced, don’t know yet but we’re hopeful,” Tennessee head coach Josh Heupel said.  “Jabari, same thing. We held them from that point on in the football game just because of the scoreboard. (We’ll) Get those guys some treatment.”

Small went down on the second play from scrimmage and spent little time in the injury tent before remaining on the sideline with his teammates.

Tillman’s injury was slightly scarier. The All-SEC receiver jumped to catch a high Hendon Hooker pass when a Akron defender hit him below his knees as he landed. Tillman immediately reached for his knee before eventually walking off the field on his own power.

“There were a few low hits tonight,” Heupel said.“You don’t know in this game what happened. I say that meaning what’s the extent of it. As I went over he started getting up.”

Tennessee was also without cornerbacks Warren Burrell and Dee Williams in the win. Williams has yet to make his Tennessee debut since transferring in from junior college this season while it was the first game Burrell’s missed this season.

“Dee and Warren, we were optimistic but didn’t feel like it was the right thing to do to play them in this one so we’re optimistic and hopeful for them as well,” Heupel said.

Tennessee returns to the field next Saturday at 3:30 p.m. ET when they host Florida at Neyland Stadium. CBS will broadcast the game.