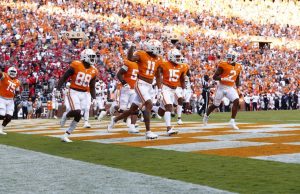 Through just three games of the season, Vols wide receiver Jalin Hyatt has looked different than he ever has in a Tennessee uniform. Hyatt looks agile, quick, well-built, and most importantly, confident.

If you ask Hyatt, he will tell you how much wide receivers coach Kelsey Pope has to do with that. It’s not hard to see, either. After Hyatt’s second touchdown catch of the game, the junior wide receiver sprinted over to Pope as the two celebrated the score.

Following Tennessee’s 63-6 victory over Akron on Saturday night, Hyatt spoke to the media about just how important Pope has been to help him find the next gear in his career.

“I went straight to Pope because he was there last year when I was struggling,” Hyatt said after the game about the touchdown celebration. “When I felt like things weren’t going right for me last year. And when he was here as an analyst, he was always there trying to help me get my confidence back. Help me as far as with my game. I’m really grateful for that guy.”

Hyatt then turned his praise for his coach into a pitch for recruits.

“I love coach Pope,” Hyatt said. “I think he’s the best receivers coach in the country. Anybody, as far as recruits, if you want to come to a program where you’ll get the ball, you spread it out, this is the place for you. Like I said, coach Pope, he did a lot for me. And my only thing, I was just trying to go to him because all the hard work he has done for me is starting to pay off. And I’m just really grateful for him.”

Hyatt had 20 receptions for 276 yards in his freshman season, followed by 21 receptions for 226 yards in his sophomore season. The Irmo, South Carolina native also had two touchdowns in each. While he did put up numbers in both years, Hyatt was struggling to reach his full potential. And with Velus Jones Jr moving on to the NFL last season, the pressure was on Hyatt this year to step up and be a season-long playmaker for the Vols.

Throughout the offseason and fall camp, Hyatt’s coaches and teammates routinely raved about his work ethic and progress heading into the 2022 season. And while it could be hinted at during the limited practice viewing periods, it wasn’t going to fully be known if he made those strides until the start of the season.

Three games into the season and Hyatt has 267 yards and three touchdowns on 18 receptions.

Hyatt has shown an improved ability to work the underneath game, the middle of the field, and deep routes. While there are still a whole lot of games to be played, and the Vols haven’t touched SEC play yet, the new-and-improved Jalin Hyatt certainly looks to be a playmaker for Tennessee this season.

And he’s telling the recruiting world about it, too.