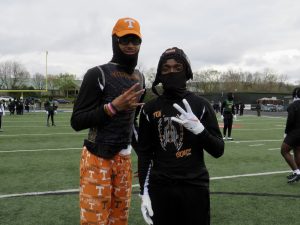 Several committed players in Tennessee’s 2023 recruiting class will be in Knoxville this weekend for the Vols’ game against Florida.

While some of them have seen Tennessee play in the past, this will be the first opportunity for some of the Vols’ commits to actually see the team play in Neyland Stadium. And, frankly, those players could not have picked a better weekend.

Aside from wonderful East Tennessee September weather that is expected for the game, the environment outside and inside of Neyland Stadium is expected to be massive. Tennessee will have ESPN’s College GameDay and Barstool Sports College Football Show live on campus on Saturday morning before a Checker Neyland game against Florida that afternoon.

“It’s also a great environment for our recruits to be able to see what gameday looks like here,” Head coach Josh Heupel said about the gameday atmosphere on Thursday. “Man, there’s nothing better than gameday here in Knoxville, Tennessee. It starts when we load the buses and drive over. You can see the fans along the river, whether that’s on the boats or tailgating on the other side of it. And when you get out for Vol Walk and there are 40,000 people? Man, there’s nothing like it in college sports.”

Tennessee Recruiting: ‘A Huge Weekend for Us’: More Recruits Heading to Knoxville for Tennessee-Florida

Tennessee and head coach Josh Heupel are more than familiar with how impactful Tennessee’s gameday environment can be for these young recruits. And with the Vols bringing in so many uncommitted players in future classes this weekend, it will be beneficial for some of the 2023 commits to meet those players face-to-face and start recruiting themselves for the Vols.

“Recruiting, it’s a huge weekend for us,” Heupel continued on to say. “You don’t do anything that takes away from your preparation, your player’s preparation. The game is the most important thing. But those moments that you have an opportunity to on the recruiting piece is vital to the continued growth of our program.”

I’ll be back in Knoxville this weekend for the game!!! pic.twitter.com/QdN5uMvCtB

I’ll be back home in Knoxville for this movie!🍊#Tennessee pic.twitter.com/gWKKk6188m

Tennessee has 21 commitments in its class of 2023 as of Sept. 22, 2022. The Vols’ most recent commitment comes from four-star cornerback Jordan Matthews back in August, who shocked the world by picking Tennessee over Texas and Michigan.