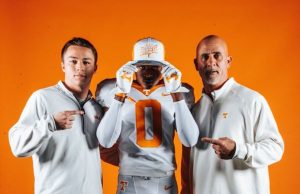 Tennessee is expecting a packed house for their game against Florida this Saturday in Knoxville. And that’s not just a reference to the sold-out crowd, either. The Vols will be welcoming in several 2023, 2024, and 2025 prospects for Tennessee visits during the game.

We’ve already spotlighted a few players to announce their upcoming visits to Knoxville, like 4-star Chattanooga wide receiver Boo Carter and four-star Nashville defensive back Kaleb Beasley. Additionally, 5-star quarterback commit Nico Iamaleava will also be in town for the game and to meet some new prospects face-to-face.

Since then, though, there have been several new announcements for players that are visiting Tennessee this weekend.

“It’s also a great environment for our recruits to be able to see what gameday looks like here,” Head coach Josh Heupel said about the gameday atmosphere on Thursday. “Man, there’s nothing better than gameday here in Knoxville, Tennessee. It starts when we load the buses and drive over. You can see the fans along the river, whether that’s on the boats or tailgating on the other side of it. And when you get out for Vol Walk and there are 40,000 people? Man, there’s nothing like it in college sports.”

More from RTI: Several Tennessee 2023 Commits in Knoxville for Tennessee-Florida

“Recruiting, it’s a huge weekend for us,” Heupel continued on to say. “You don’t do anything that takes away from your preparation, your player’s preparation. The game is the most important thing. But those moments that you have an opportunity to on the recruiting piece is vital to the continued growth of our program.”

Here’s a look at some of the uncommitted prospects that will be at Tennessee-Florida:

I will be in Tennessee this weekend 🟠⚪️

OV this weekend to Tennessee!! Can’t wait to be back on Rocky Top🧡 #GBO 🍊 #GoVols pic.twitter.com/LfSdVMm1Jv