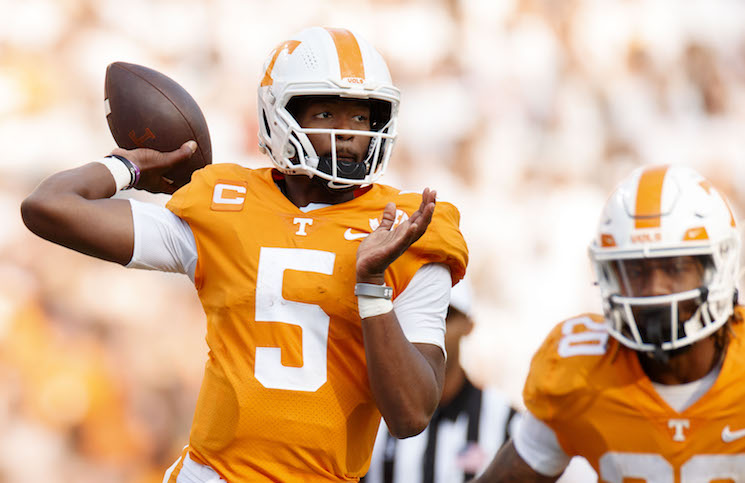 Hendon Hooker stood in the north end zone tossing the football with a teammate. Defensive tackle Omari Thomas just forced an Anthony Richardson fumble and the Vols were taking over at their own 13-yard line leading by 10 points early in the fourth quarter.

In the biggest college football game of the week four slate, Hooker calmly danced to the music of the Pride of the Southland Band. With the poise of an athlete that listens to worship music to ready himself for battle, Hooker joined his teammates in the huddle and led a 10 play, 87 yard touchdown drive that proved to be the difference in the Vols’, 38-33, win over Florida.

“I really didn’t feel any sort of spotlight or stage,” Hooker said. “It’s just us out there playing football like we do every day. Another day in the office and the outcome was how we wanted it to be.”

It was quite the day at the office.

The quarterback that’s rejuvenated Tennessee’s offense, along with his head coach, saved his best collegiate performance for the biggest stage— even if the stage didn’t feel all that large.

“Hendon played his butt off tonight,” Tennessee head coach Josh Heupel said postgame. “He played at an elite level. Decisive with the football. Accurate with the football— intermediate, short, long— used his legs at the right time. Created big plays there and a tough competitor man. The offense fed off of him all night long.”

Tennessee’s offense was phenomenal in the win, scoring in six of nine drives while finding the checkerboards in five of them. Hooker didn’t account for all of that offense but he was pretty darn close.

Completing 79% of his passes for 349 yards and two scores while adding 112 yards and a touchdown on the ground, Hooker accounted for 80% of Tennessee’s offense.

More From RTI: Four Takeaways On A Massive Win

He did it all while dealing with an “upper body” injury that he suffered in the first half.

“Hendon (was) fierce. Played like a warrior tonight,” Heupel said. “We had a lot of guys that did that but Hendon was relentless in the way he competed and obviously was well enough to play the way that he did. Played at an unbelievably elite level.”

Even while banged up, Hooker didn’t shy away from running the ball. The super senior signal caller took an abundance of hits and kept popping back up. Why did Hooker keep playing aggressive while banged up?

Hooker’s calm nature and collected play shined in the biggest stage of his career to this point. The Greensboro, North Carolina native’s performance etched his name in Tennessee folklore as just the fourth quarterback this century to beat Florida.

A season ago, Hooker ended Tennessee’s wandering in the quarterback desert since Josh Dobbs graduated. Against 20th-ranked Florida, Hooker gave the Vols a win they’ve desperately searched for since Dobbs was behind center.

His elite performance cemented his legacy in Knoxville and may have kick started his Heisman Trophy campaign.