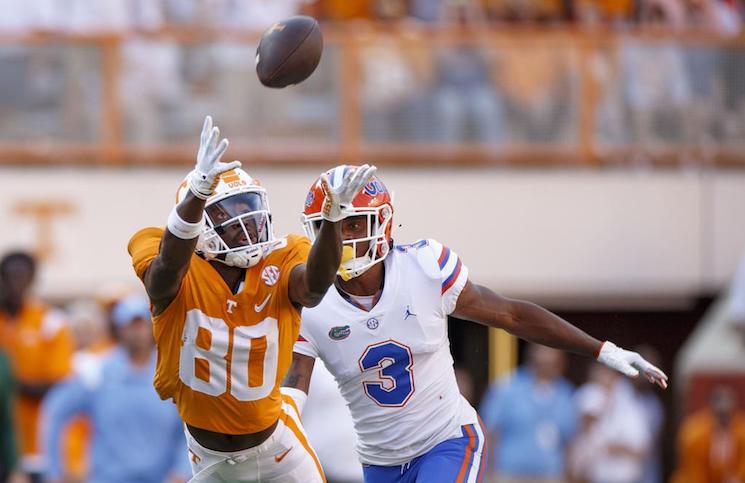 Tennessee improved to 4-0 on the season, knocking off No. 20 Florida, 38-33, inside Neyland Stadium Saturday evening.

The Vols led by as much as 17 points in the fourth quarter before a furious Florida push gave the Gators a chance at the shocking victory. Instead, Kamal Hadden intercepted Anthony Richardson on the game’s final play to seal the victory.

Here are the five critical moments that led Tennessee to its first victory over Florida since 2016.

Tennessee’s offense was nearly perfect for much of the afternoon. It looked easy for the Vols on their opening drive as they quickly drove into the red zone while facing just one third down.

Then the Vols’ offense made one their few mistakes of the afternoon as Princeton Fant caught a Hendon Hooker pass and advanced to the Florida 12-yard line before fumbling.

The Gators recovered and Tennessee’s offense failed to capitalize on its defense’s opening drive stop.

Tennessee ended up opening the scoring with a field goal on its following drive. However, instead of creating some real early game separation against the double-digit underdogs, the Vols spent much of the first half playing from behind.

Hooker To Fant And Keyton In Two Minute Drill

Florida punter Jeremy Crawshaw pinned Tennessee at the one-yard line with 2:50 remaining in the first half.

CBS sideline reporter Jenny Dell reported that Hooker was dealing with an upper body injury and after a slow start to the drive — though it included a first down on the second play — the Vols seemed content to run clock and take a four-point deficit to halftime.

In fact, it was Florida that used a timeout with 1:33 left in the half ahead of third-and-10 at Tennessee’s 12-yard line.

Two of the biggest plays of the game proceeded. Fant — who had a nice afternoon after the early fumble — just reached the yard to gain on third down. The next play, Ramel Keyton hauled in a spectacular diving catch to move the Vols to Florida’s 35-yard line.

That drive ended with Hooker finding Bru McCoy in the end zone and Tennessee taking a halftime lead. The Vols doubled up the Gators by scoring another touchdown after the half. The two drives changed the game and it all started with Fant and Keyton’s massive catches.

It looked like that would continue when Florida converted a third-and-11 and fourth-and-two to drive into Tennessee’s red zone early in the fourth quarter.

In an ode to College Gameday personality Lee Corso, Omari Thomas said not so fast my friend. The Vols defensive tackle forced a fumble on an Anthony Richardson designed run in the red zone.

Jeremy Banks recovered and Tennessee marched 87 yards down the field to take a three possession lead that felt like the game at the time.

When Billy Napier decided to go for two trailing by 11 with 4:49 left in the game the conversation was more around the 10.5-point spread than Florida actually winning.

Anthony Richardson’s pass falling incomplete didn’t feel like a big deal at the time, but boy did it prove to be.

After Florida recovered an improbable onside kick, the Gators trailing by five instead of three — the case if they kicked PATs or converted one two-point conversion — proved massive. Instead of trying to set up for a field goal, the Gators had to go 61 yards in 16 seconds.

Tennessee couldn’t make the stop to get the ball back in its offense’s hands to run out the clock and when Florida recovered an onside kick with 16 seconds remaining the Vols’ defense had to get the stop to end the game.

Florida hit a pass to Tennessee’s 39-yard line on the first play of the drive and after an incompletion the Gators had one last play from scrimmage.

Like he did on the final play at Pitt, defensive coordinator Tim Banks drew up pressure. The blitz got home. Byron Young hit Anthony Richardson as he threw and a Kamal Hadden intercepted a well under thrown pass to end the game.

Hadden immediately ran the ball to his family in the crowd as Tennessee’s sideline poured onto the field to enjoy its first win over Florida since 2016.