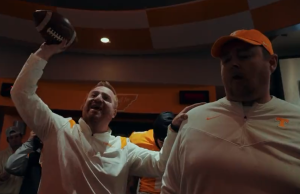 After defeating No. 20 Florida for just the second time in the last 18 years on Saturday, Tennessee’s football team remixed an old song about an old rival during the postgame celebration.

On a cold October night in 1995, after Tennessee defeated Alabama in Birmingham by a score of 41-14, then-Tennessee head coach Phillip Fulmer led the team in a simple tune.

There are several videos showing Fulmer’s teams singing that song about Alabama. However, as mentioned previously, Tennessee remixed the song a bit on Saturday night in Knoxville.

More from RTI: Tennessee Climbs Into the Top 10 After Victory Over Florida

Tennessee won the right to celebrate and talk their talk about Florida after defeating the Gators in Knoxville. And, frankly, that’s something that Tennessee hasn’t been able to do very often in recent history.

It’s not hard to see how much this victory meant to the Tennessee team.

“This means a lot to me,” Tennessee DB Trevon Flowers said before the Florida game. “We play a lot of people in the SEC. Every game means a lot to me. But it’s kind of more like, [the Florida game] is what I came here for. It’s what I stayed for. There’s just a lot of stuff that goes into it. So it means a lot more for me, especially, this is my last year. I’ve been through the ups and downs here at Tennessee. The good, the bad, the ugly. This is what I stayed for, man. It means so much. I can’t explain it.”

Tennessee’s season is not automatically successful because of the Florida game. But it is a massive turning point in the trajectory of that rivalry. And, at the same time, it’s continued progress for the season that Tennessee is trying to build right in front of our very eyes.

Here’s the thing. Tennessee now has a marquee win against a Top 25 rival, but this is only the beginning. The Vols still have three rivals left to play this season, all with teams that are ranked higher and have a better record than Florida.

While the Florida win was undeniably massive for Tennessee, it needs to just be the start. The Vols still have upcoming matchups against No. 1 Georgia, No. 2 Alabama, and No. 7 Kentucky coming in the next handful of weeks.

It’s safe to say that Tennessee enjoyed the heck out of their win over Florida on Saturday. Now, it’s time to rest up during the bye week and refocus on the SEC competition ahead.

No. 8 Tennessee will have a bye week this week in college football.