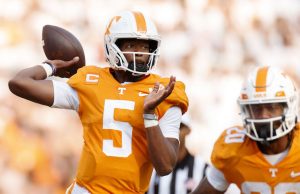 With a week of rest now behind them, Tennessee quarterback Hendon Hooker and the rest of the Vols’ offense are now preparing to take on No. 25 LSU this Saturday in Baton Rouge.

While LSU doesn’t bring a world-beating defense to the table, the Tigers have been one of the better teams against the pass this season. LSU currently sits at No. 26 in the nation in total passing yards allowed, only giving up an average of 184.6 yards per game through the air.

So what will Hooker and the Tennessee wideouts need to do to have success against the Tigers’ defense in Death Valley? Head coach Josh Heupel explained exactly that during his Monday morning press conference.

“You’ll see press-man at times but you see a bunch of coverage variation from them, too,” Heupel said about the LSU secondary. “So Hendon’s got to do a great job of identifying the rotations. Our receivers have got to do the same thing.”

As Heupel mentioned, though, LSU will be using different coverages against Tennessee’s explosive offense.

“When it is man-to-man, you’ve got to find a way to go win,” Heupel said. “You guys have seen us since we’ve gotten here that were going to try to put those guys in a position to win but we also trust those guys to go win in those situations.”

Trust is something that is common in the wide receiver’s room. That’s something that several players and coaches have talked about in the last few weeks, more specifically, going back to Cedric Tillman’s injury.

While Tillman is working his way back to the playing field, Tennessee running back Jabari Small has full faith in the Vols’ next-man-up mentality.

“There’s talent all across the roster,” Small said on Monday. “Ramel [Keyton] stepped in and did a good job last week – played confident, didn’t think too much. I think that’s just the name of the game, honestly. The next man has to step up. It can’t be any falloffs. So we believe in Ramel just like we believe in Cedric [Tillman]. Everybody across the board is just next man up mentality.”

While Tennessee’s rush defense has been solid and is sitting at No. 21 in the country heading into week six, LSU’s total rush defense isn’t far behind. The Tigers have the No. 32 rush defense in the nation allowing 109.2 yards per game on the ground.

As we have seen from Tennessee since the beginning of the Heupel era in Knoxville, it’ll be important for the Vols to have balance throughout the contest in terms of the ground game and the passing game. While it will be strength on strength with Tennessee’s passing offense and LSU’s pass defense, the Vols can give themselves quite a bit more breathing room by forcing the Tigers to respect the run game from the running back room and Hooker himself.