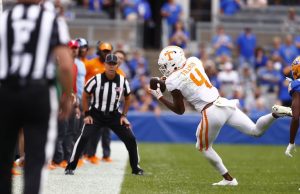 It’s now been more than two weeks since wide receiver Cedric Tillman last played in a game for the Vols. Tillman suffered an ankle injury against Akron on Sept. 17 and received surgery for it the following week.

According to Tennessee head coach Josh Heupel on Thursday, Tillman’s playing status for this Saturday’s Top 25 matchup against LSU is still undecided.

“We’ve got great trust and belief in the guys that have played,” Heupel said on Thursday about Tennessee’s receivers. “That’s our starters, and Cedric, too, but the guys behind all of those guys, too. Last week we didn’t change how we played when Cedric was out. Cedric’s able to move around. Ultimately that’ll be a decision that the medical staff and him make tomorrow – whether or not he is going to play.”

Heupel did provide an optimistic post-surgery update on Monday, as well.

“Cedric did have surgery,” Heupel said to start the week. “The timeline, he did that just had an opportunity to speed up the recovery process side of it. We’ll see where he’s at. He was limited but moving around a little bit today. We’ll see how it unfolds this week and see where we’re at.”

Prior to his injury, Tillman was Tennessee’s most effective receiver in terms of targets and receptions. The preseason First Team All-SEC receiver was arguably Hooker’s go-to target, which was evidenced by his overtime touchdown against Pittsburgh in week two.

Despite his injury, though, Tennessee didn’t lose any steam in the passing game with Tillman out against Florida. Tennessee quarterback Hendon Hooker threw for 349 yards with Ramel Keyton, Bru McCoy, and Jalin Hyatt stepping up for huge games through the air.

“It’s just preparation,” Hyatt said on Tuesday about the Vols’ success against Florida. “We knew we had to step up, especially with one of our big-time receivers out. We just want to keep going with the preparation that we are doing each week and for game day. So, when we’re focused throughout the week, that’s the outcome we want on Saturdays.”

Hyatt, Tennessee’s leading receiver through the first four games of the season, currently has 325 yards and three touchdowns on 23 receptions so far. And with a stingy LSU secondary coming up this Saturday, all eyes will be on Tennessee’s wide receiver room once again.

Will that wide receiver room have Tillman? With Heupel’s answer on Thursday, it’s hard to say. It’s probably more likely for Tillman’s return to come later in the season, but we’ll just have to wait until Saturday to find out.