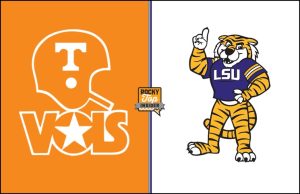 No. 25 LSU will host No. 8 Tennessee this Saturday in Baton Rouge, LA.

The Opponent: Louisiana State University, or LSU, is the flagship university for the state of Louisiana. It was founded as a military school in the 1800s and began to take its present shape in the 1920s. LSU’s football program claims four national titles, three of which come this century. Famed halfback, and Heisman trophy winner, Billy Cannon helped earn the school its first title in 1958. Tennessee will meet LSU for the first time under Brian Kelly. Tennessee leads the all-time series against LSU 20-10-3. However, LSU has won the last five meetings, including a win over legendary Tennessee coach Brady Hoke in 2017.

Are they Good? Yes, LSU is a good team. They are a talented team that is still improving under first-year coach Brian Kelly. While Ed Orgeron may have torpedoed the culture and discipline of LSU football, he left Kelly plenty of talented players. Where talent was missing, like at quarterback and in the secondary, LSU did a good job filling holes through the transfer portal. The Bayou Bengals are 4-1 on the season, their only loss a chaotic opening game against Florida State. LSU is winning in spite of a ho-hum passing game, and fairly makeshift offensive line. Few teams are without their flaws though. This very well may be the best team Tennessee has played all year. We will know more when LSU and Florida play in a few weeks.

What will this tell us about Tennessee? I expect this game to tell us plenty about Tennessee’s defense. Specifically, what adjustments did they make during the bye week? There is nothing wrong with celebrating the Florida win while also being realistic about the deficiencies it magnified. Florida averaged nearly 19 yards per completion against this Tennessee secondary. You don’t need stats to tell you what your eyeballs saw though. The Vols were Charmin-soft in coverage against Florida, a regular complaint through four games. It would be a shame to make it easy for Jayden Daniels and this LSU passing game to get into a rhythm without putting up much resistance. I want to see how the Vols have adjusted over the bye week.

What Vegas says: The consensus opening line last Sunday was Tennessee -3.5. That was bet down to as low as -2.5, but appears pretty settled in at -3. Some folks have commented that the line feels a little phisy at only -3. If you assume home field still counts for 3 points then the neutral site spread would be around Vols -6. I personally don’t think that’s too far off. As always, please gamble within your means.

Matchup to watch on Offense: The home run. No, not more cutaways to Aaron Judge, but rather Tennessee needs to connect on a few long passing plays Saturday. The Vols have been superb in this category under Josh Heupel. They currently lead the SEC in passing plays over 20 yards. Tennessee’s 11.3 passing yards per attempt is easily best in the conference. Nothing quiets a hostile home crowd like a big play. Tennessee will need big plays too against what has been a pretty salty LSU pass defense. Opponents are completing just 55% of their passes against LSU, with four interceptions to only five touchdowns. This is a remade LSU secondary, featuring a lot of transfer starters. They have been good overall, but have shown vulnerability by allowing 16 completions of 20 yards or more. That comes without playing too many offenses that are known to stretch the field vertically; Mississippi State & Auburn specifically. The Tigers had a few busted coverages against Auburn and allowed backup QB Robby Ashford to throw for 337 yards. Busted coverages aside though, this is a good LSU defense. They are going to continually pressure Hendon Hooker with arguably the best bookend pass rushers in the SEC. The Tigers have only allowed two touchdowns in the red zone this whole season. They are going to play aggressive defensively. They will blitz, and they will blitz from exotic places. LSU will take those chances knowing Tennessee’s receivers will be open downfield. The Vols need to connect on those opportunities.

Matchup to watch on Defense: I already touched on cleaning up the cushion in this secondary, something every Tennessee fan wants to see on Saturday. I’ll be fascinated to see how Tim Banks decides to approach Jayden Daniels, and what has been a very conservative LSU offense thus far. It is fair to call Daniels a poor man’s Anthony Richardson. Does Tennessee defend him like they did Richardson; respecting his legs, containing him in the pocket, and making him throw into open windows against zone coverage? The alternative could be to bring pressure against Daniels. LSU allowed four sacks against Auburn, with true freshman right tackle Emery Jones struggling mightily in pass protection. LSU has done a poor job overall in pass protection this season, although should have starting guard Garrett Dillinger back this week. By bringing pressure, the Vols certainly risk having Daniels make big plays with his legs. Tennessee also puts its corners on an island against superior, even if underutilized, receivers from LSU. Tyler Baron & Byron Young have both been very effective this season, but only have two combined sacks through four games. Freshman Joshua Josephs has looked really sharp in pass rushing situations, and probably deserves more of Roman Harrison’s snaps. They are opportunities to get after Jayden Daniels on Saturday. Tennessee can force him into turnovers, or create plays in the backfield. Does Tim Banks deem that a risk worth taking, or does he force this LSU offense to consistently move the ball downfield?

Fun Fact: The internet is a strange, and often lucrative, place. In browsing through notable LSU alumni, I saw a lot of names I know. Shaq, Pistol Pete, James Carville, and OG Grand Wizard David Duke (oddly enough I couldn’t find him on the school website) all attended LSU. I did not recognize the name Addison Rae though. The 22-year-old social media influencer boasts 80 million TikTok followers. That brings in a reported $5 million per year plus other endorsements. What a time to be alive!

So What Happens? It’s been a dozen years since Tennessee has played in Baton Rouge. Dooley’s victory celebration after his 13 man defense stopped LSU on the goal line is hard to forget. Tennessee is obviously trying to move past the mishaps and misfires of the past decade. Both of these teams are flawed, and both are very talented. Can Tennessee wear down a defense that has surrendered only three combined points in the second half of its two SEC games? LSU is going to bring pressure. They will bring it mostly with BJ Ojulari and Harold Perkins Jr, the best bookend pass rushers Tennessee has seen all season. Hendon Hooker has played really well against pressure his entire Tennessee career. The Tigers will get home a few times, and Hooker has to protect the ball in those instances. He has been really good at that as well. I have a tough time seeing Tennessee lose this game without losing the turnover battle. I really like Tennessee using its pace to counter an aggressive LSU defense. Put the Tigers on their heels, and make it hard for them to play an attacking style of defense. Defensively the goal should be simple. Don’t let Jayden Daniels make easy completions. Don’t be the team that Kayshon Boutte breaks out against. LSU can not beat Tennessee with the offense they have shown through five games. That is a fact. Unfortunately for Tennessee the Tigers have plenty of room for improvement in terms of throwing the ball. I do expect a better passing performance from Jayden Daniels. LSU is going to take more chances than they have through five games. Brian Kelly hinted as much. It certainly makes sense as home underdogs. The Tigers will connect on some of those against an outgunned Volunteer secondary. I think Tennessee forces just enough negative plays on defense though. This defensive staff won’t just sit back and play soft zone coverage for 60 minutes. Tennessee’s last three games in Baton Rouge have all been decided by one score or less. Saturday is no exception. Vols 30, Tigers 28