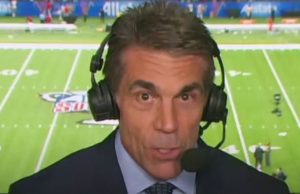 ESPN broadcaster Chris Fowler had a head-scratching description and explanation of the incident that occurred in Knoxville last weekend regarding Alabama wide receiver Jermaine Burton and a female Tennessee fan. While heading off the field following the loss to Tennessee in Neyland Stadium, Burton allegedly struck a female Tennessee fan in the back of the endzone as fans were rushing the field.

During the second quarter of Alabama’s game against Mississippi State on Saturday night, Fowler gave an explanation to the television audience about the incident. Fowler, though, chose to begin the conversation by establishing how dangerous of an environment Knoxville was before getting into the actual shove that reportedly occurred.

“Burton was the guy that felt he was in danger when those fans at Tennessee rushed the field,” ESPN’s Chris Fowler said during the broadcast. “He reached out with his hand and he shoved a female Tennessee student. Caused a big uproar. It was posted on her Tik Tok and Saban elected not to discipline him in terms of a suspension for the game. That they handled it internally. Paid some price but able to play here tonight.”

“Burton is the guy, though, they’ve got him working with anger management counsel,” Fowler continued on to say. “He threw a punch at a Texas A&M player. He was heavily provoked in that game but did throw a punch and was penalized and it could have been extremely costly in that game. It was tight, late in the game when it happened.”

“Saban hoping he will learn to sort of control his emotions a little bit better,” Fowler said. “It’s a tough situation though when fans rush the field.”

After commenting on the matter in the middle of the week, Alabama head coach Nick Saban also addressed the conversation around his wide receiver after the contest, clarifying one point that Fowler had wrong.

“I didn’t think it was necessary to suspend the guy,” Saban said via ESPN. “If you knew the whole story, maybe you wouldn’t either. But I’m not going to divulge that.”

“Look, I don’t know how many of you have ever been in a situation like that, but I talked to him,” Nick Saban said about Burton. “He was scared. I was scared. Some of our other players were scared. I think you learn to respect other people because we have a responsibility to do that, regardless of the circumstance that we’re in. I talked to the guy. We have him in a counseling program. It’s not an anger management program, as people announced today. Nobody ever said that – that’s not the problem, that’s not the issue. But it’s about having the proper respect for other people.”

The ESPN broadcast essentially just repeated everything that Saban had been saying throughout the week. Fowler chose to lead the story by establishing Tennessee’s dangerous environment, which takes the focus and weight away from the alleged physical incident that occurred on the field. While Fowler didn’t just gloss right over the incident, the fact that it was set up in the way it was is telling enough.

Burton began the game as a starter for the Tide’s offense and ended the game with two receptions for 40 yards.

Come on, @cbfowler . Did you watch the video? Do you think he was “in danger” from the young woman? How did EVERY other Alabama player and coach get to locker room without incident? Use logic. Ridiculous regurgitation. pic.twitter.com/mFhvy1kddE

Umm. @espn should be ashamed. Chris Fowler and Kirk Herbstreit excusing/dismissing Burton hittin a female fan after we ALL SAW THE VIDEO is pathetic. BAD look. ESPN. Bad.