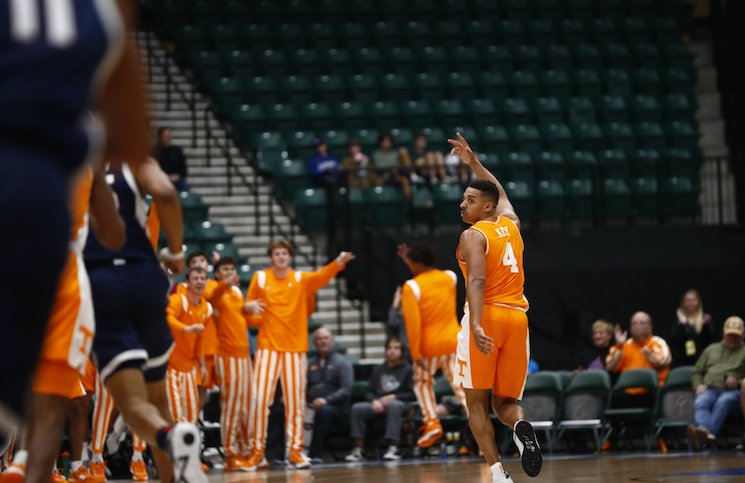 FRISCO, Texas — Tennessee got its final tune up of the preseason dominating Gonzaga, 99-80, in an exhibition game at the Comerica Center Friday night.

Both teams put on an offensive clinic in the first half before the Vols turned a four-point halftime deficit into a blowout win.

Here’s some notes and observations from the 11th-ranked Vols’ thriller against No. 2 Gonzaga.

It’s an injustice by me to include Tyreke Key’s performance in this section and not a section of its own. Key was the best player on the court in a game that included two-time First Team All-American Drew Timme.

The Indiana State transfer came to Tennessee with little fanfare but consistently impressed with his scoring ability in preseason practice.

It showed up in a big way in Texas. Key scored a team-high 16 first half points on four-of-five shooting from the field and three-of-three shooting from the three-point range. The 6-foot-3 guard scored in the midrange, at the basket and especially from three-point range where he looks more like the sophomore version of himself that shot 45% from three before suffering a nagging shoulder injury.

Key finished the game with 26 points and looked like the guy Tennessee assistant coaches raved about in the preseason.

The other newcomer expected to have a major role on this Tennessee team is five-star freshman Julian Phillips. Phillips had a quiet first half, earning two quick fouls and missing his only shot attempt in 10 first half minutes.

Phillips came alive in the second half, scoring 12 points including three triples. Much like Tennessee’s open scrimmage two weeks ago, Phillips looked like he was pressing a bit in the first half.

Once the five-star settled it, he looked extremely impressive.

Tennessee forward Josiah-Jordan James did not play in the exhibition game as he continues to work back from an offseason knee surgery. The Vols have been taking it slow with James recovery as he’s bound to log major minutes throughout his senior season.

The preseason Second Team All-SEC selection was on the trip and extremely active even though he didn’t play. James went through pregame warmups, dressed out and was active during the Vols’ shoot around earlier Friday morning— though the majority was off to the side.

Rick Barnes previously said he believes James will be ready for the Nov. 7 season opener against Tennessee Tech. Time will tell if that comes to fruition.

Tennessee having the success they had against the No. 2 team in the country without James is incredible.

Jonas Aidoo is not a Tennessee starter but the sophomore is the most talented big man on the Vols’ roster. He showed that potential consistently against the Zags.

Blocking shots, putting Gonzaga big men on posters and showing his strong outside jump shot— Aidoo did it all.

Aidoo took three triples, shooting them with the confidence that shows Barnes is comfortable with him taking them.

If Barnes is confident with Aidoo taking them, then Aidoo is doing his job on the defensive end of the floor. Aidoo is a little raw defensively but his shot blocking is fantastic.

The sophomore ended the night with nine points, a block and an abundance of affected shots at the rim.

Olivier Nkamhoua told me during Tennessee media day that playing with his international team this summer was extremely important for him to get back in the rhythm of the game after missing the final six weeks of last season with a knee injury.

There was no rust in Nkamhoua’s offensive game against the Zags.

The senior power forward looked as comfortable on the court against a quality opponent as I’ve seen him in his career.

Nkamhoua scored inside, in the midrange and on the perimeter on his way to scoring 11 points on four-of-seven shooting.

I guess I’m going to end up complimenting the entire front court but Uros Plavsic deserves a lot of praise for how he played.

The center was a legitimate weapon offensively, tallying 13 points without missing a shot. Plavsic held his own defensively against Timme as well. That’s just as impressive as what he did offensively.

The senior big man was in midseason form with the trash talk as well.

A Tail Of Two Halves Defensively

Rick Barnes demands that his teams play great defense. I can’t imagine he was pleased at the break. Gonzaga scored 54 first half points while shooting over 55% from the floor.

In fairness, Gonzaga is usually one of the five best offensive teams in the country and has offensive success against just about anyone. It wasn’t all bad defense from Tennessee in the first half. Some of it was as simple as Gonzaga running good offense and making tough shots.

Still, the half was not up to Tennessee’s defensive standard.

The second half looked much more like the Tennessee defense we’re used to seeing. Gonzaga scored just 26 second half points and Tennessee hounded them, making very little easy.

If there was anything to critique on the defensive end in the second half it was the defensive rebounding. Those shortcomings were in large part due to Gonzaga missing an abundance of shots around the rim.