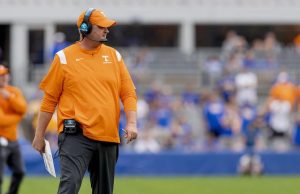 As the Volunteers continue to be the talk of the college football world, Tennessee head coach Josh Heupel now has his name being brought into NFL conversations.

During the start of the fourth quarter between Pittsburgh and Philadephia on Sunday, CBS NFL broadcaster Tony Romo revealed an interesting thought regarding the Tennessee head coach.

“We were watching Tennessee upset Bama a couple weeks back, remember?” Romo said to Jim Nantz on the broadcast. “Tennessee head coach Josh Heupel, remember he was at Central Florida with Scott Frost when he went undefeated, goes over here to Tennessee. Brings them back now to prominence. He will be on the radar for every NFL team after this year.”

With how connected Romo is to the NFL world, the comment very likely could be coming from someone he trusts within the league.

“Just throwing that one out there for you,” Romo said to close.

“I’m looking at you, and I know you know something,” Nantz said back to Romo. “So, okay.”

“Not saying he’s going to go,” Romo responded. “But I’m just saying they’ll be asking if he is wanting to.”

It’s hard to put into words just how well of a job Heupel has done since arriving in Knoxville.

Heupel became the Tennessee head coach in early 2021 in the wake of Jermy Pruitt’s firing and the subsequent investigation that was on the table. Despite losing a number of players to the transfer portal, Heupel started to put his fingerprint on the Volunteers’ program, leading Tennessee to a 7-6 record in 2021.

However, in 2022, the doors have been completely blown off the barn. Tennessee is currently the No. 2 team in the country with a perfect 8-0 record through the first nine weeks. Heupel has led Tennessee to five Top 25 victories over Pittsburgh, Florida, Alabama, LSU, and Kentucky. The Vols are now gearing up for a game against Georgia that will send the winner to the SEC Championship game.

Josh Heupel has Tennessee steamrolling opponents in the right direction. However, in just a few months, there could be more and more stories about NFL teams with interest in Heupel. Especially teams that are struggling offensively.

Heupel’s stamp at Tennessee has been his offensive scheme, which is currently No. 1 in all of college football.

Could we hear more about Josh Heupel and the NFL in the next few months? It’s hard to say. But with Tony Romo’s comments, Nantz’s response, and Tennessee continuing to shine in the national spotlight, it seems increasingly likely that teams will have an eye on Josh Heupel.