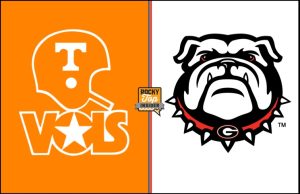 The Opponent: The University of Georgia became the first university in the United States to gain a state charter in 1785. Samford Stadium hosted its first game in 1929 with hedges encircling the field from the beginning. Amid much controversy, the hedges were removed to widen the field for soccer in the 1996 Summer Olympics. I will admit that Georgia has some great alumni. This list includes some of my favorite television actors like Kyle Chandler and Wayne Knight, as well as the esteemed chairman Billy Payne. There is no shortage of great athletes either, such as Bubba Watson, arguably a top 25 player on the upstart LIV Golf tour.

Are they any Good? Yes, Georgia has joined Alabama as a gold standard in college football. The Bulldogs are the defending national champions and have smothered most SEC competition over the last five seasons. That has especially been the case at Samford Stadium. Georgia has lost only one home game over the last six seasons. Defensively, Georgia has been giving up less than 10 ppg at home these last two seasons. This is a very good team.

What does Vegas say? You could bet this game over the summer around +15.5. Some books opened the line early at +11.5. It was pretty quickly bet down to +8.5, where it appears to have settled out. Tennessee is a MASSIVE public play this weekend, Bet MGM confirmed as of Thursday morning that 94% of the money nationally was on Vols +8 or higher. That does not exactly bode well for the Big Orange. Tennessee has been a pretty regular Public Play since the Florida game though. Like a true underdog story, the Vols have defied the odds and continued to reward Joey Public. This weekend would be a Herculean feat. It sounds like the Vols could potentially bankrupt Las Vegas.

Matchup to watch on Defense: Straight up the Middle. By that I mean two different concerns for Tennessee’s defense; the line of scrimmage and guarding the middle third of the field against Georgia’s duo of NFL tight ends. For all the headlines that Hendon Hooker and Jalin Hyatt have grabbed, improved play along both lines of scrimmage has been key to Tennessee’s success this season. Georgia’s offensive line has manhandled Tennessee’s defensive front as of late. The Dawgs ran for 6.7 ypc last season and nearly 200 yards total in 2020. The Vols have recorded only three sacks total in the last two Georgia games combined. It is a testament to how strong of an offensive line Georgia has fielded the past few years. Unfortunately for Tennessee, it is another strong unit for the Dawgs this year. Georgia has only surrendered seven sacks on the season, and is rushing for more than 5.6 yards per carry. Tennessee has been significantly better against the run this year though, and has been more active overall pressuring the quarterback. To have a chance on Saturday, the Vols will need to continue the solid play from its defensive front.

The headline for Georgia is a stable of freaky tight ends. Sophomore Brock Bowers, aka Baby Gronk, is averaging over 17.5 ypc on the season. This is after 14 total touchdowns his freshman season. Darnell Washington pairs with Bowers, and can basically serve as an additional linemen at 6’7″ and 280 pounds. The former all-world recruit is enjoying a breakout season this year, also averaging 17.5 ypc. Georgia can move these guys all over the field, and not surprisingly can create some scary matchups for opposing defenses. Tennessee has not seen many dynamic tight ends this season, a position that gave the Vols trouble last season. Can Tennessee’s safeties slow these guys down at all? Can Tennessee’s linebackers cover in space? Bowers and Washington are going to get their catches. There is no avoiding that. Tennessee has to watch the yards after catch. They have to bring these guys down at first contact as much as possible. If Georgia’s tight ends are averaging close to 20 ypc then the Vols are in big trouble.

Matchup to watch on Offense: Finish. Tennessee had the ball inside the red zone five times against Georgia last year and came away with only 17 points. Tennessee has increased its red zone productivity significantly this season, scoring at a 96% clip and converting touchdowns at an 80% clip. For the second straight season, Georgia dominates the SEC in opponents’ red zone conversions. The Dawgs are allowing scores just 65% of the time, and are only allowing touchdowns 29% of the time. The next closest defense is at 44%. Georgia has a really salty run defense that plays even bigger in the red zone. That size & depth is a big reason Georgia has only given up two rushing touchdowns on the season. Tennessee has rushed for 0.0 and 1.5 yards per carry in its last two meetings against Georgia. That stat needs to improve dramatically on Saturday. The Vols have been much improved in the traditional run game, and there is always the threat Hooker brings with his legs.

For the Vols to pull the upset, it will take another huge performance from Hendon Hooker. Does Georgia come after Hendon Hooker on Saturday? Most opponents have been very careful to blitz Hooker this season. This Tennessee offense is taking nearly two less sacks per game than a season ago. Improved offensive line play and a very decisive veteran QB have really helped that fact, but there is no doubt teams are playing Hooker very carefully. I think Georgia will defend Hooker and the Vols differently though. Kirby plays almost exclusively man-to-man with his corners, whereas Tennessee has seen more zone this season. The loss of veteran pass rusher Nolan Smith is a big blow for Georgia, but the return of Jalen Carter could be massive. How will Hooker respond if the Dawgs regularly bring pressure? Hendon Hooker is a Heisman co-favorite with CJ Stroud at this point. This will be Hooker’s last regular season game against a ranked opponent, and likely his last chance to play in front of a massive TV audience. CJ Stroud gets a later opportunity against Michigan on November 26th. While that is a less important subplot to this game, it is hard to see Tennessee pulling off the upset without a big game from its quarterback.

Fun Fact: A new cultural term has emerged in America this week. “COVID amnesty” has been making the rounds online. For those not familiar, the term means you can’t hold people accountable for any irrational behavior or actions in response to COVID. It is an interesting tactic, trying to revise history when it is less than two years old. Whatever though. Let’s not forget one bold leader from those early days of 2020. Last time the Vols took the field in Athens, Jeremy Pruitt was determined to represent the personal choice of every American. You believe in disciplined masking? Sure, he is wearing one. You think it is all silly hygiene theater? Look, it’s not even touching his nose or mouth. Something for everyone. Thank you, Jeremy.

So What Happens? It comes down to how much Tennessee can score on this Georgia defense. Over the past few years, the Dawgs have been drawn into a few shootouts but those have all been on the road or on neutral fields. How good has Kirby Smart’s defense been at home? Over the last five seasons, only five teams have broken 20 points on this Georgia defense inside Samford Stadium. Two of those five were UMass & Kent State in meaningless games. The last team to score over 30 in Athens? Jauan Jennings put the Vols over the 30-point threshold with his Hail Mary catch in 2016. From 2017 onward these Kirby Smart defenses have been historically good. This stat has made the rounds this week, but Kirby Smart is 1-9 in games when his opponent scores 30+. He is 73-6 otherwise. It makes Tennessee’s goal simple, get over 30 points by whatever means necessary. Defensively the Vols are going to have to pressure Stetson Bennett into some mistakes. That won’t be easy for a QB that has only taken seven sacks on the season, and has solid scrambling ability. I expect Tim Banks to throw the kitchen sink at Bennett. This has been a Tennessee defense that has rolled the dice all season long. They have been gashed at times, and they have created big turnovers at times. For all the talk about Tennessee’s offense, Georgia’s is pretty damn good too. The Dawgs may not score with the speed or flash of the Volunteers, but they score plenty. Tennessee’s offense has to first force Georgia into a shootout, and then Tennessee’s defense has to create one or two big plays. That is the path to victory. It is a narrow path indeed. Yes, Tennessee holds the #1 spot in the playoff rankings and averages nearly 50 points per game. That doesn’t change the fact that Georgia still has a massive talent advantage in this rivalry, and gets the benefit of home-field advantage on Saturday. So can the Vols tread that narrow path? I am skeptical…but the good news is these guys don’t pay me enough to be concerned with accuracy. Like an absolute sheep, I have picked Tennessee to win in every game this season. Let’s not shorn my wool just yet. Vols 38, Dawgs 35