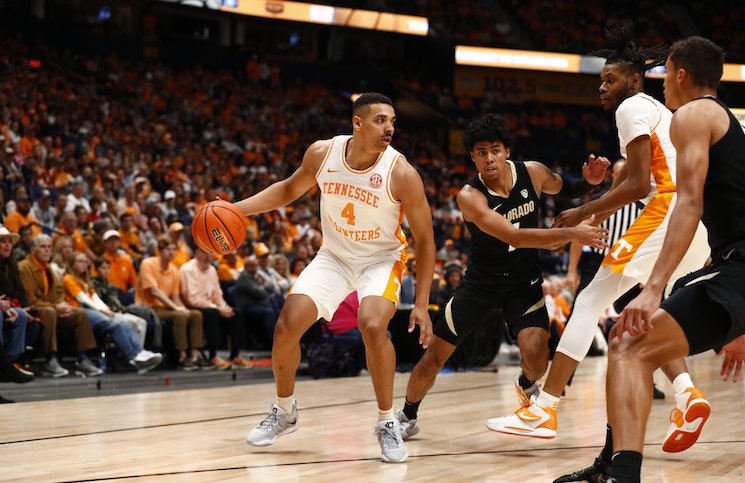 NASHVILLE, Tenn. — Colorado used a big second half to hand Tennessee basketball its first loss of the season, 78-66, inside Bridgestone Arena Sunday afternoon.

The Vols found little offensive rhythm and Colorado capitalized to earn the win as 16-point underdogs.

Vols Struggle To Score Inside, Get To Foul Line

For the second straight game to open the season, Tennessee struggled to hit outside shots in the game’s first half. The Vols made just five-of-17 first half three-point attempts.

Tennessee is going to shoot the three-pointer whether its going in or not but the Vols struggled to get to the basket and make shots, or find open shooters off the dribble drive. Zakai Zeigler was quiet for the second straight game and didn’t make his first basket until 12 seconds left in the first half.

With Zeigler struggling to get to the hoop and the Vols already average interior scorers in foul trouble/ injured (Uros Plavsic) Tennessee struggled to find interior offense. In the first half Tennessee attempted just five shots at the rim.

Tennessee did a much better job of getting inside shots in the second half but couldn’t finish as many as you would expect. The Vols ended the game shooting three-of-16 at the rim.

The Vols did get to the rim and draw fouls and that was their saving grace. Tennessee scored 17 of its 24 first half points at the free throw line and shot 24-of-30 at the charity stripe for the game. While Tennessee got to the free throw line by driving to the basket that was far from the only way they got there. The Big Orange shot an abundance of free throws in the bonus and double bonus in a game with whistle happy officials.

Tennessee’s ability to get to the free throw line and make shots when they got there was its saving grace on a rough offensive afternoon.

Zakai Zeigler turned the ball over twice in the game’s first two minutes and it set the tone for a frustrating first half/game for the Vols’ point guard.

Zeigler started to find his rhythm in the second half as he got to the basket at a much higher clip. Still, the sophomore was not the difference maker Tennessee needs as its offense floundered.

Zeigler finished the game 12 points on four-of-12 shooting from the field.

Combine Zeigler production with Santiago Vescovi’s two-of-13 shooting from the field and you had a recipe for poor offensive performance.

Colorado didn’t set the world on fire offensively in the second half but this was not a game where you needed elite offense to win.

The Buffs tallied 46 second half points on 15-of-28 shooting from the field and strong free throw shooting down the stretch.

Once Colorado began slowly pulling away in the middle part of the second half, Tennessee turned up its defensive pressure. The defensive intensity wasn’t completely ineffective as the Buffs turnover woes continued in the game’s final 20 minutes.

However, the pressure did extend the driving lanes and Colorado exploited Tennessee’s ball defense off the dribble. The help seemed to constantly be a second late and the Buffs killed Tennessee by making 14 shots at the basket in the second half.

With Tennessee’s offensive woes continuing — and even magnifying — in the second half, Colorado’s second half offensive input was more than enough to earn a comfortable win.