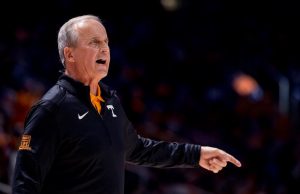 The 22nd-ranked Tennessee Volunteers are back on the right side of the .500 mark with an 81-50 victory over Florida Gulf Coast on Wednesday night in Knoxville.

Coming off the loss to Colorado over the weekend, the Vols were looking for a strong bounce-back win in front of the home crowd. And, sure enough, that’s what Tennessee accomplished on Wednesday.

Tennessee did what they needed to do as they built a lead on the Eagles and never let the former “Dunk City” back into the game.

After the victory, Tennessee head coach Rick Barnes met with the media to discuss his thoughts on the game. Barnes was very critical of the team after the Colorado loss but was quite pleased with how the Vols responded against the Eagles. Barnes said that the mindset, the focus, and the preparation were all significantly better going into the FGCU game.

“Again, a mental approach,” Barnes said after the game. “I’ve often said, as a coach, most of the games you lose, you lose in practice. You lose it with your preparation. I think when game time comes, everybody wants to win, but if you’re not prepared, not just physically but mentally, as a coach, I felt it.”

Check out everything that Rick Barnes said on Wednesday after the game below: