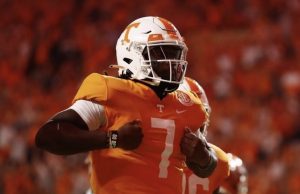 Milton was the starter to open the 2021 season and will now officially find his second start at Tennessee in the final regular season game of the 2022 season.

As a five-year collegiate quarterback, Milton has been through quite a lot. The Pahokee, Florida native spent the first three years of his career at the University of Michigan before transferring to Tennessee prior to the 2021 season. Head coach Josh Heupel chose Milton as the starting quarterback in 2021, but an injury in the second game of the season opened the door for Hooker, who ran away with the opportunity.

In his one and only start at Tennessee, Milton and the Vols hosted Bowling Green in Neyland Stadium. Tennessee handily won that day by a score of 38-6 as Milton completed 11 passes for 139 yards.

Big Joe accounted for 3 scores in his Big Orange debut

More from RTI: The Latest Bowl Projection Round Up for Tennessee Football

Milton would complete 21 more passes in a backup role over the course of the 2021 season, but didn’t have too many standout moments like he has in 2022.

Over the course of the 2022 season, even as a backup, Milton has made several memorable throws and has some pretty solid statistics on the year. Milton has 573 yards and six touchdowns on 23-of-33 passing this year.

Milton did replace Hooker in the South Carolina game after the injury occured in the fourth quarter and connected with wide receiver Squirrel White down the left sideline before finding Cedric Tillman in the endzone.

Tennessee and starting quarterback Joe Milton III will take on Vanderbilt in Nashville this Saturday night.