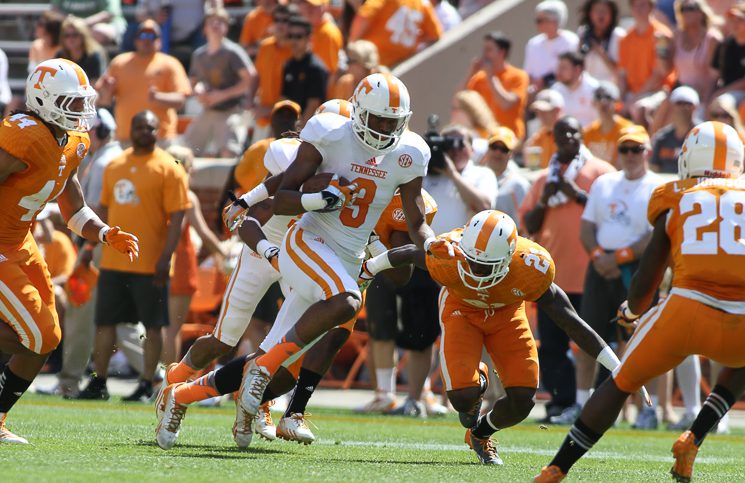 Gone were playmakers at receiver like Justin Hunter, Cordarrelle Patterson, the undervalued Zach Rogers, and the big armed – albeit sometimes absent-minded – quarterback, Tyler Bray. Like him or not, Bray was good enough throw for 3,612 yards and 34 touchdowns in 2012, and those three wide receivers accounted for 2,352 of the yards and 21 of the touchdowns (keep those numbers in mind).

Couple those losses at QB and WR with their replacements being tasked with learning a brand new system under all new coaches and the results last year were pretty much as expected. 2013’s passing offense accounted for only 1,979 yards and 12 touchdowns (remember those numbers from earlier?), both good enough to finished next-to-last in the conference – only Arkansas finished with fewer yards and Florida with fewer touchdown passes.

But gone is last year, and here for 2014 are plenty of new faces and a few returning playmakers that should erase the memory of the second worst Vol aerial attack in the last decade. Only 2008 was worse – and I’m still not ready to talk about 2008.

While they probably knew upon arrival, last season confirmed to Butch Jones and his staff that they needed more help at receiver, so they went out and got it. JUCO All-American Von Pearson and top in state wide-out Josh Malone arrived in the spring and have done nothing but dazzle since they stepped on campus.

Pearson had a multiple moments during spring practice that proved he can make elite plays at this level, including this juke on Cam Sutton and this one-handed touchdown grab over Malik Foreman that would become a SportsCenter Top-10 play. Pearson’s ability to make people miss in the open-field is outstanding, but he also has incredible hands and the awareness to high point the football and make difficult catches in traffic. Pearson will be a nightmare in the slot for corners and linebackers alike.

Malone had a quieter spring as he adjusted to the coaching style of Zach Azzanni and the rigors the come with being a collegiate athlete, but then he absolutely exploded in the Orange and White Game.

I have submitted this highlight as evidence:

Malone would finish the game with 6 catches for 181 yards and three touchdowns. Not bad for a guy who, if not for graduating early, would have still been in high school instead of playing in a spring game.

The Vols will also have Vol legacy Vic Wharton as an option this season. Wharton wasn’t able to enroll early, but possesses great speed and seems to have all the tools to make an early impact at the slot receiver position. Wharton is also likely to get a look at returning kicks and/or punts – an area that the Vols must improve in this season.

But, as I said, it isn’t just the new guys that will have a big impact on this year’s improved passing game. Last week it was announced that junior playmaker Alton “Pig” Howard was back with the football team after taking an extended “leave of absence” to attend to personal matters. Pig has apparently handled his business and looks poised to build on his season from a year ago when he led the Vols in both receptions (44) and receiving touchdowns (3). While Pearson and Wharton will certainly see some reps in the slot this summer, Pig Howard is very talented and has all of the experience at the position. That experience and his rededication to this team since his leave of absence has him in a great position to have a big year.

Finally, we get to Marquez North. North is arguably the most imposing receiver in the SEC and he looks poised to build on his team high 496 receiving yards from last season. North’s physical play and improved knowledge of the position have him predicted by many to have one of the biggest breakout seasons in the SEC.

Brad Crawford of Saturday Down South had this to say about North’s potential in 2014:

“Look up ‘BEAST’ in the dictionary and you’ll find a photo of North’s mug next to Godzilla, the king of the monsters. By season’s end, North has a chance to be king of SEC receivers if Butch Jones can lock in a reliable quarterback. North’s catch radius is his best attribute, revealed last season when the freshman hauled in several passes most receivers would’ve mishandled. When the ball’s in the air, North’s ability to snatch it away from defensive backs looks effortless.”

And there’s the caveat – quarterback play.

Look, last year was, in my opinion, the perfect storm to set up an abysmal year of Big Orange pitch-and-catch. Talented players left, new players had to learn a new system, injuries at inopportune times…etc. As Butch Jones said, his quarterbacks had to play “perfect football.” Catch radiuses were small, routes were run improperly and play-calls were simplified and, at times, predictable.

All three quarterbacks, Justin Worley, Josh Dobbs and Nathan Peterman, return this season a year-older, a year wiser and with a far more promising group of pass-catchers than they had a year ago. It appears that Dobbs and Worley will enter fall camp with the best chances at earning the starting job. And after the two went a combined 17 of 22 for 350 yards and 4 touchdowns – each also adding a rush of over 45 yards – in the Orange and White Game, I think Vol nation would, and should feel comfortable with either of them at the helm.

Because whoever is named the starter will be surrounded by one of the more talented receiving corps in the league, even if all of them aren’t household names…yet.