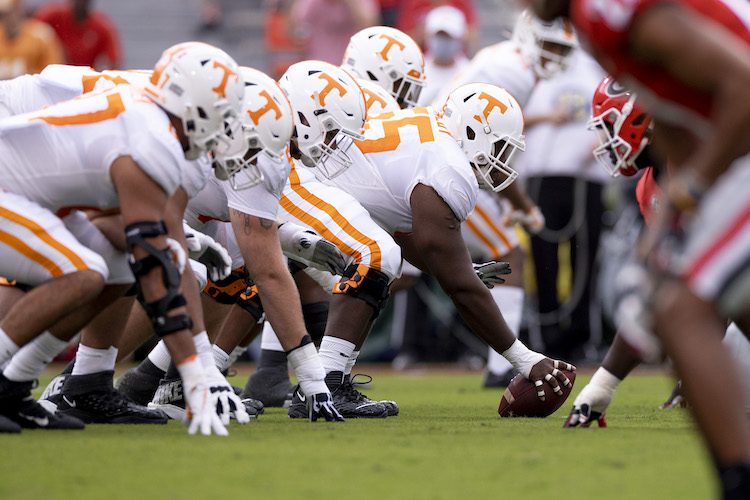 The Vols led 21-17 at the half courtesy of two Jarrett Guarantano to Josh Palmer touchdown passes, but the Bulldogs won the second half 27-0 to pull out the victory.

Here are our three biggest observations from Tennessee’s loss to Georgia.

Tennessee shot itself in the foot time and time again against Georgia.

Tennessee’s turnover issues led to Georgia winning the second half 27-0. The Vols led 21-17 at the half.

The offense also committed 10 penalties for a total of 84 yards on the night. Most of the penalties were along the offensive line whether it be a false start or a snap infraction.

Tennessee’s offensive line is dominant. But the big boys up front didn’t show up against an elite Georgia defensive front.

Pre-snap penalties were an issue for the Vols, but the bigger issue is that they were simply beat on too many 1-on-1 situations. They couldn’t generate a push in the running game and they failed to protect Guarantano.

Tennessee averaged exactly 0.0 yards per rush and 3.4 yards per play. In pass protection, the Vols gave up five sacks for a loss of 46 yards. Georgia also had six tackles for a loss of 52 yards.

While a lot of talk will surround Tennessee’s offensive performance in the second half, and rightfully so, the defense had an up-and-down performance. The Vols did a good job of playing bend, but don’t break defense at times, but ultimately, the Bulldogs were too much to handle.

Georgia quarterback Stetson Bennett finished the day 16-of-27 for 238 yards, two touchdowns and zero interceptions. Bennett didn’t face a ton of pressure and had multiple open receivers running around in the secondary.

On the ground, Georgia averaged 4.46 yards per carry on designed run plays. The Bulldogs had four different players rush for more than 40 yards.

Tennessee now turns its attention to Kentucky. The Vols and Wildcats will kickoff at 12 p.m. ET next Saturday inside of Neyland Stadium.