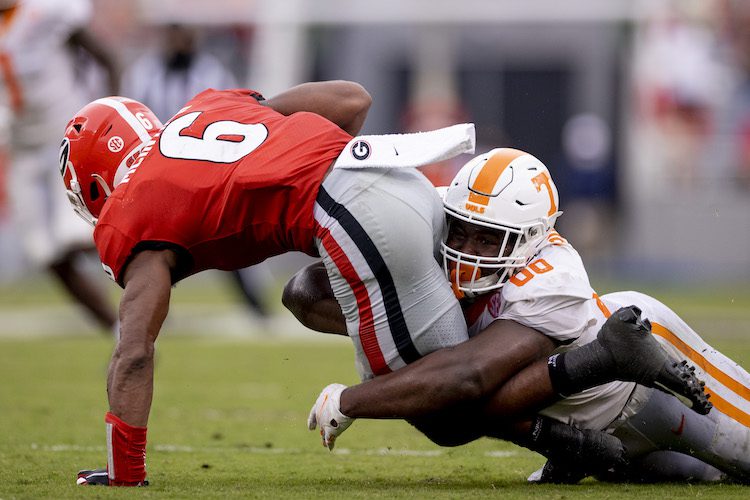 The Vols led 21-17 at the half courtesy of two Jarrett Guarantano to Josh Palmer touchdown passes, but the Bulldogs won the second half 27-0 to pull out the victory.

Here are our position grades from Tennessee’s loss to Georgia on Saturday.

Jarrett Guarantano played well in the first half. The Vols’ starting quarterback was 11-of-13 for 124 yards and two touchdowns. Guarantano threw two touchdowns to Josh Palmer in the first half, both of which were really nice throws. But the second half wasn’t near as smooth from Guarantano. His offensive line did him zero favors as he was pressured on most throws, but he threw an ill-advised interception and fumbled three times. Guarantano has to protect the football better regardless of the circumstances surrounding him.

Tennessee’s backs were hampered by the play of Tennessee’s offensive line and couldn’t get much going. The group rushed for 40 yards and averaged 2.0 yards per carry, but again, it was mostly because the offensive line didn’t open up many holes for them to run through. The biggest failure on behalf of the backs was in pass protection, as they were blown up multiple times and allowed the defender to pressure the quarterback.

Tennessee’s receivers struggled in man coverage for most of the game. The Vols weren’t open much, but were still able to make some plays. Especially in the second quarter. Palmer hauled in two touchdowns with great catches and Brandon Johnson made a couple of nice plays as well.

The tight ends were once again non-existent in Tennessee’s offense. Princeton Fant caught one pass, but it was in garbage time. The group didn’t look all that great blocking either and received just one target on the day.

It was stunning how poorly Tennessee’s offensive line played. Georgia’s defensive front is elite, but Tennessee’s o-line is talented and deep as well. You wouldn’t know that based off of watching Saturday’s game, as the offensive line was whipped all day long. Georgia had six tackles for loss, five sacks, three forced fumbles and many pressures on Guarantano.

The defensive line played better than expected, but it was still an up-and-down performance. The unit did a better job of getting off the ball against the run and taking on blockers to make room for the linebackers to make a tackle, but it still wasn’t where it needed to be on a consistent basis. They’re moving in the right direction, however.

It was a mixed bag from Tennessee’s outside linebackers. On one hand, Deandre Johnson committed an awful penalty that got him ejected from the game in the first quarter, leaving Tennessee short-handed. But on the other hand, Tennessee’s young outside backers showed up in his place. Morven Jospeh, Tyler Baron and Roman Harrison all made plays in Johnson’s absence. The big thing with this group is finding more consistency.

Henry To’o To’o was awesome and turned in an A+ performance with 11 tackles and two tackles for a loss. But he wasn’t the only inside linebacker playing against Georgia. Jeremy Banks and Quavaris Crouch also played, and struggled to be consistent. Banks and Crouch made some nice plays against the run, but they’re still a liability in coverage.

There were too many defensive backs running open in the secondary which allowed Stetson Bennett to throw for 238 yards, two touchdowns and zero interceptions. Tennessee was especially beat in the slot in Shawn Shamburger’s returner. Kearis Jackson beat Shamburger on a couple of different occasions to finish with 91 yards and a touchdown.

Tennessee’s special teams weren’t asked to do much outside of Paxton Brooks. Brent Cimaglia didn’t attempt any field goals and Eric Gray didn’t return any punts. Velus Jones Jr. did return three kicks, however, but only for an average of 21.0 yards per punt.

Brooks was busy, punting the football six times. He averaged 47.2 yards per punt, had two travel over 50-yards, down three inside of the 20-yard line and his long traveled 55-yards. Brooks flipped the field on multiple occasions after the offense put him in a tough position.

It’s hard for me to believe that Tennessee’s coaching staff didn’t put the players in the best position to succeed against Georgia. To me, Saturday seemed more of an execution issue rather than a gameplan issue. Of course the coaching staff wasn’t perfect, but even Pruitt mentioned that on multiple occasions defensively, defenders didn’t execute their assignment. At the end of the day, it was still an ugly loss to one of Tennessee’s biggest rivals. And the penalties will always reflect on the coaching staff. The Vols weren’t ready to play from that perspective and it showed.