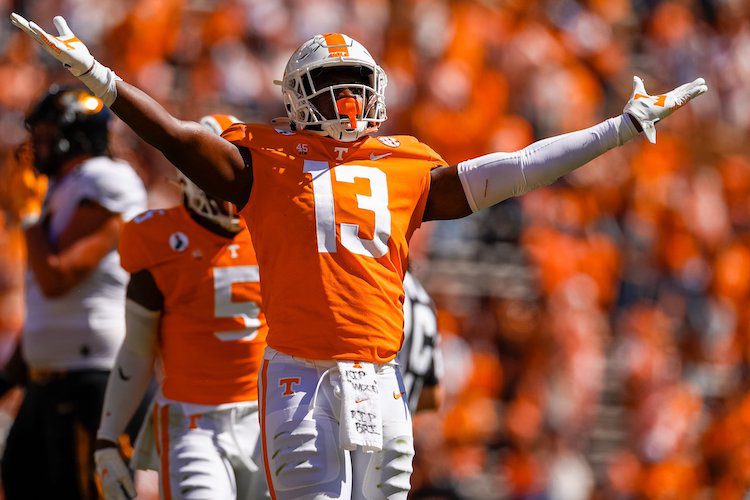 Deandre Johnson didn’t make the best of decisions in the first quarter of Tennessee’s loss to Georgia on Saturday.

In the first quarter in Athens, Johnson was ejected for targeting when he hit Georgia quarterback Stetson Bennett after he had gotten rid of the football. Johnson lunged at him with his helmet in the process of doing so.

“First off, it was a bad decision on his (Deandre Johnson’s) part,” Pruitt told reporters over Zoom on Monday. “He took two and a half steps.

“The whole thing about really any defenseless player, if you can avoid contact, and you see that, it’s your job as a defensive player to do that. I’ve always felt like that this rule, there’s probably inconsistency in the rule. It’s a good rule, though, because it helps our game and it helps protect our players. But it is a tough rule to kind of enforce.”

Johnson’s ejection hurt Tennessee in multiple ways. Not only did it call upon young linebackers in Roman Harrison, Tyler Baron and Morven Joseph to step up, but it also extended the Georgia drive.

Bennett’s pass fell incomplete on the second down play, which would have forced Georgia to face 3rd-and-6. Instead, it gave them a first down and a free 15-yards. Georgia had 1st-and-10 from the 30-yard line and three plays later, the Bulldogs tied the game at 7-7 on a 1-yard rushing touchdown from Zamir White.

“I think that was Deandre should’ve avoided the quarterback,” Pruitt said, “It’s pretty simple. He knows that.”

Johnson had 3.5 sacks entering Saturday’s game, the most of any Vol defender. Because Johnson was ejected in the first half against Georgia, he’ll be available this weekend as the Vols return home to face Kentucky.