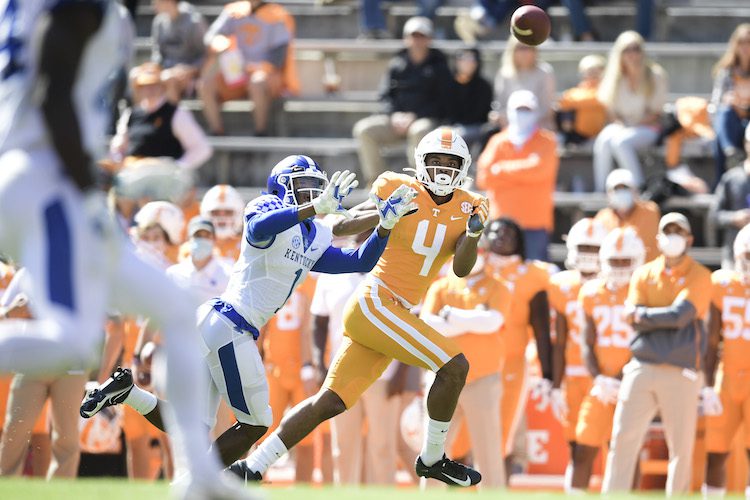 No. 18 Tennessee fell to Kentucky 34-7 as a result of tumultuous quarterback play on Saturday inside of Neyland Stadium. It was the Cats’ first win over the Vols in Knoxville since 1984. It was also the first time Kentucky has beaten a ranked Tennessee team since 1959.

The game was knotted at zero at the end of the first quarter. Three straight turnovers to begin the second quarter, however, led to Kentucky taking a 17-0 lead with 6:18 remaining in the first half. The deficit would prove to be too much for the Vols to overcome.

Here are our five biggest observations from Tennessee’s loss to Kentucky.

Too many turnovers — again

Tennessee’s first half against Kentucky was as bad as its second half against Georgia last Saturday. The Vols turned it over four times in the opening half to help Kentucky jump out to a 17-0 lead.

Jarrett Guarantano fumbled in the first quarter when Ty Chandler ran into him as he was trying to throw the football. It knocked the ball out and Kentucky fell on it. The Vols were driving deep into Kentucky territory when Chandler caused the fumble.

In the second quarter, Tennessee turned it over on three consecutive possessions. Guarantano threw a pick-six on the first possession of the second quarter. He tried to find Cedric Tillman near the sideline on 3rd-and-4, but Kentucky corner Kelvin Jospeh jumped the pass and returned it for a touchdown.

Guarantano threw his second pick-six on the following drive. Tennessee was driving deep into Kentucky territory once again when Guarantano tried to force a pass, but threw it right to a Wildcat linebacker Jamin Davis who returned it 85-yards for a touchdown. Guarantano simply should have checked the ball down.

To cap it all off, J.T. Shrout threw an interception on the following drive. Shrout replaced Guarantano, but on 2nd-and-21, also tried to force a throw and was picked off.

The Vols lost the turnover battle by three. That’s not going to win you football games.

The quarterback play was awful against Kentucky. We just illustrated the issues that Guarantano brought on himself to get benched, and the forced error by Shrout to not make the most of his opportunity.

I don’t know what you do if you’re Jeremy Pruitt going forward. Jarrett Guarantano is a liability, and though it’s a small sample size, it appears that J.T. Shrout is as well. Also, what does it say about Brian Maurer that he didn’t even get an opportunity to make something happen? The coaching staff skipped straight to a true freshman. Maybe Harrison Bailey is the answer, but word behind the scenes is that he still has a ways to go before he’s truly ready to play.

Tennessee’s quarterback situation is holding the program back. The Vols have a good football team, but the quarterback position makes you think otherwise.

As a result of the game being out of hand and the poor performances from Guarantano and Shrout, true freshman Harrison Bailey made his first career appearance midway through the fourth quarter.

Tennessee ran the ball for the majority of the one drive he was in the game, but he did complete his first career pass — a 24-yard completion to fellow true freshman Malachi Wideman. It was Wideman’s first career catch. Bailey finish 1-of-4 for 24 yards. His lone drive stalled out in the red zone as the Vols turned it over on downs.

Defense continues to struggle in the middle of the field

Yet against Tennessee’s defense struggled over the middle of the field in pass defense. Shawn Shamburger was beat in the slot on multiple occasions, as was Trevon Flowers a time or two. Tennessee’s linebackers weren’t great in coverage either.

Couple getting beat one-on-one multiple times with miscommunications in the secondary, and you have Terry Wilson completing 12-of-15 passes for 101 yards and a touchdown. Wilson doesn’t have a great history of being a terrific passer.

Tennessee was able to run the ball somewhat well despite what the final score indicates. The offensive line performed poorly last Saturday against Georgia, but bounced back against Kentucky.

When adjusted for sacks, Tennessee rushed for 4.9 yards per carry. Eric Gray rushed for 128 yards on 22 carries, and Ty Chandler rushed for 51 yards and a touchdown on 12 carries. As a team, the Vols rushed for 190 yards.

Tennessee now welcomes No. 3 Alabama to Neyland Stadium. Kickoff between the Vols and Crimson Tide on the Fourth Saturday in October is scheduled for 3:30 p.m. ET on CBS.