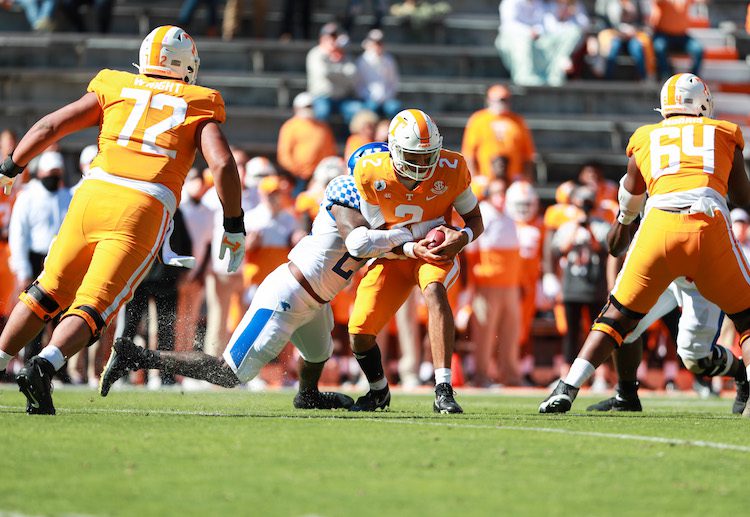 No. 18 Tennessee fell to Kentucky 34-7 as a result of tumultuous quarterback play on Saturday inside of Neyland Stadium. It was the Cats’ first win over the Vols in Knoxville since 1984. It was also the first time Kentucky has beaten a ranked Tennessee team since 1959.

The game was knotted at zero at the end of the first quarter. Three straight turnovers to begin the second quarter, however, led to Kentucky taking a 17-0 lead with 6:18 remaining in the first half. The deficit would prove to be too much for the Vols to overcome.

Here are our position grades from Tennessee’s loss to Kentucky.

Tennessee’s quarterback play against Kentucky was atrocious. Jarrett Guarantano threw a pick-six on back-to-back possessions to start the second quarter and give Kentucky 14 points. J.T. Shrout received an opportunity on the following drive and immediately threw an interception as well. Guarantano returned following Shrout’s pick and couldn’t manage to get the offense moving.

Tennessee’s backs ran well against Kentucky and certainly weren’t the issue offensively. Eric Gray and Ty Chandler combined to rush for 179 yards and a touchdown on 36 carries. The duo averaged 4.97 yards per carry against the Cats.

It’s hard to gauge the receivers with the current situation at quarterback, but they are struggling to get open down the field quite often. Outside of Josh Palmer and Brandon Johnson, there isn’t anybody that you really trust at the moment.

Against Kentucky, Johnson was Tennessee’s leading receiver with four catches for 37 yards. Palmer caught just one pass for 11 yards on three targets.

The tight end position for Tennessee continues to be non-existent. Joe Osovet’s group doesn’t appear to be a liability in run blocking, but they’re not remotely close to being a factor in the passing game. Jacob Warren caught one pass for seven yards, but it was his only target on the afternoon. Princeton Fant didn’t receive a single target.

Tennessee’s offensive line didn’t play near as bad as some of the reaction would indicate following the game. They were beaten a couple of times, particularly at tackle, but the unit opened up plenty of lanes for the running backs to run through. And did so against a good Kentucky front seven. There are still things that need to be cleaned up, but the Tennessee offensive line played much better against the Cats than they did the week prior against Georgia.

Similar to the offensive line, Tennessee’s defensive line didn’t play great football, but they played well against a good Kentucky rushing offense for most of the game. The Cats didn’t begin breaking off bigger runs until later in the game when the Vols defense was worn out from being on the field all game long.

Tennessee’s outside linebacker did a solid job of setting the edge against Kentucky to keep the Wildcats’ rushing attack funneled towards the middle of the field, which allowed Henry To’o To’o to clean up much of the mess. Where the outside linebackers struggled was against the pass. Kentucky didn’t throw the ball a ton, but Terry Wilson also wasn’t pressured a ton. The unit didn’t register a sack or a quarterback hurry.

Henry To’o To’o was awesome once again, leading Tennessee in tackles for loss with two, to go along with eight tackles. Fellow sophomore Quavaris Crouch also played well, totaling a team-high 11 tackles. It was a good matchup for the unit as Kentucky didn’t try to take advantage of their struggles in pass coverage. They’re fairly stout against the run and that showed against a run-first offense.

Tennessee’s defensive backs continue to struggle with miscommunications in the secondary, which is uncalled for with a unit that has played quite a bit of football. Wilson only attempted 15 passes and threw for 101 yards, but that was solely because of Kentucky’s desire to run the football. Wilson was far too efficient throwing the football.

Tennessee didn’t attempt a field goal for a second consecutive game, but it did punt the ball quite a bit. Paxton Brooks punted five times for an average of 37.8 yards per punt, which isn’t great. Brooks’ longest punt traveled 46-yards and he did not pin Kentucky inside of the 20-yard line once.

Tennessee has a quarterback issue that is hampering the rest of the team from reaching its full potential. And though Jarrett Guarantano is making decisions that high school quarterbacks don’t make, the responsibility still ultimately falls on the shoulders of Jeremy Pruitt, Jim Chaney and Chris Weinke. It’s an execution issue, not a play-calling or scheme issue, but it’s clear that Tennessee should have brought in a graduate transfer quarterback over the offseason.