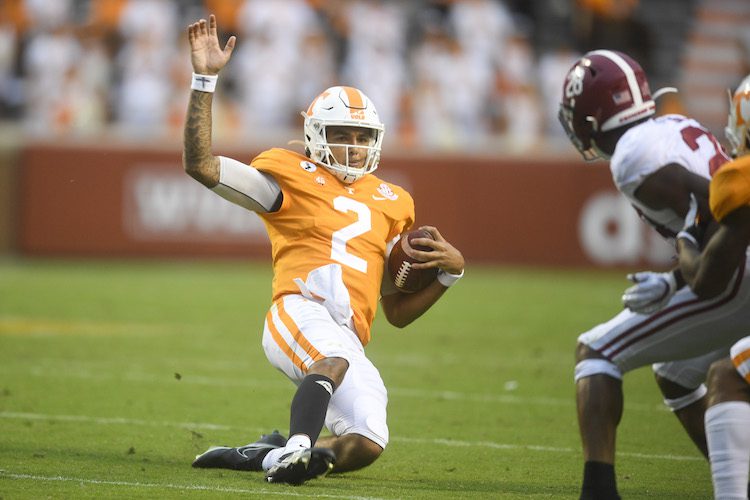 “Jarrett will be the starter,” Pruitt said. “He understands our expectations and I felt like he’s had another good week continuing to do the things that I’m talking about — getting the guys around him to play at a higher level.

“It’s one thing about (playing) on the offensive side — it takes all 11 guys to play together. Defensively you can have a couple of great players and they can make some plays, be erasers. But offensively, you can have 10 guys do exactly right, but the left guard gets beat, or he doesn’t do it the right way and it messes up the entire play. It only takes one guy who can create a bad play offensively. That’s why you have to be able to play as a unit up front, that’s why communication is so important, playing together, and that’s something we tried to continue to focus on over the last couple of weeks.”

Guarantano was benched in Tennessee’s fourth game of the season against Kentucky after throwing pick-sixes on back-to-back possessions. J.T. Shrout replaced Guarantano, but quickly found himself back on the bench after throwing an interception of his own. Guarantano came back in the game and started a week later against Alabama.

In Tennessee’s last game out against the Crimson Tide, Guarantano was 13-of-24 for 162 yards and two touchdowns. He did not thrown an interception.

Guarantano has thrown for 914 yards, six touchdowns and three interceptions on the season. He’s completing 61.5% of his passes and has a quarterback rating of 58.9.

Tennessee and Arkansas is scheduled to kickoff at 7:30 p.m. ET on Saturday night in Fayetteville. The Vols are looking to snap their three-game losing streak.